Every now and then, I look up the areas where I have been walking on online maps, just out of curiosity. It can be interesting to retrace my steps on a satellite view and discover where exactly I have been, how close to certain other places I've been, and wether my sense of direction corresponds with reality (it mostly does).

A few evenings ago, I was checking a road I had been walking earlier that week, and zooming out a bit, I spotted a strange structure in the fields nearby, where funnily enough I had never walked.

It looked like this on my ipad, only without the green marker (I have not activated that on the pad): 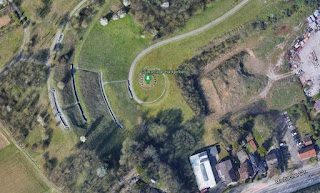 I really couldn't work out what it was supposed to be, and when O.K. and I were thinking about where to walk this weekend, I suggested we go investigating this place.

I had a pretty good idea how to get there from where I had been walking last time, and sure enough, we soon arrived at the top of a gentle slope. Looking down, we could clearly see the strange structure: 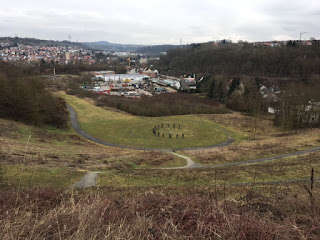 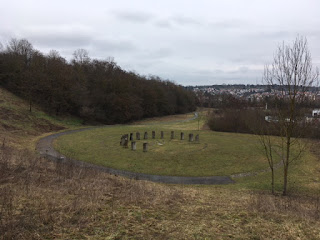 It is a sundial, with the stones being about chest high for the average adult. 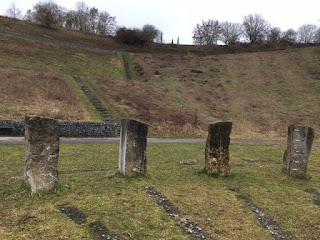 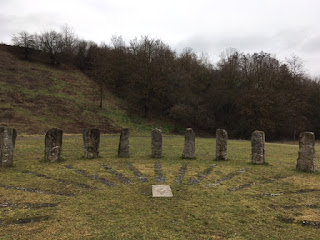 The whole place is called "Grünanlage Hungerberg". The word Grünanlage means that it is a public space, and Hungerberg (literally hunger mountain) is the name of the area of old.

The sundial is not ancient, but supposed to remind visitors of the ancient history of this area; Celtic tribes settled here many centuries ago. Later, the Romans conquered this part of the world, and the Roman remains I have blogged about here are not far.

There is also a "geological window", allowing a good look at the layers of soil and rock. 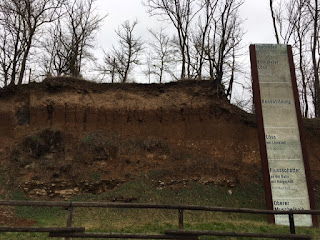 Until 1981, the place was not open to the public, but a working quarry. The company operating the quarry still exists; their buildings are at the other end of the green space. There is also a series of small ponds, where toads and other amphibians live, as well as a wooden building where people can learn about nature, bee-keeping, the fragile ecosystem of our area and what is done to protect it.

Around the amphi-theatre like structure are benches and steps, inviting people to sit and have picnics or simply rest. Of course, on a chilly, wet day like this past Sunday, nobody was sitting there, but there were still quite a few people out walking. It still amazes me that I have never walked there before - it is just one path "off" my more familiar walking routes.

I am sure I will be back there on a sunnier day.