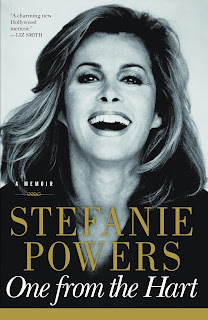 One from the Hart

Celebrity (auto)biographies come in all shapes and sizes; some don't make a secret of their actual authorship, others try to pretend to be the celebrity's own work, and others still are really written by the person whose life is the subject of the book. This is the case with Stefanie Powers' autobiography, first published in 2010.

If I tell you that there is a nude picture of her inside, and a penis is mentioned as early on as page 12, you may be forgiven to think that this is a juicy Hollywood story, much like a series of yellow press articles of the lowest kind. However, if I tell you that the picture shows little Stefania Zofya as a toddler in the bath, and the scene with the penis - well, let's just say she is not talking about another actor or other Hollywood personality there, and the book's focus is not on the glitzy aspects of her life.

Instead, we learn of a close-knit family and neighbourhood where Stefania grows up, encouraged to do what she loves, which is dancing. Out of that follows acting, but again, you would be mistaken to think that she was one of those poor little girls dragged to endless castings by their over-ambitious mothers. There was plenty of time to just be a child, too; playing on the ranch of relatives, which planted a life-long love of animals in her, and with her brother.

My sister and I love "Hart to Hart" and often have been watching the reruns together; the book was in fact one of her presents for me last Christmas. We were often poking fun at how convenient it was that Jennifer Hart spoke the language of every place they went to, be it Mandarin or Spanish, and how she and Jonathan were able to do everything from horseback riding to classical ballet, singing, fencing, skiing and playing golf.

The reality is that Stefanie Powers does indeed speak all those languages (and did so long before she was cast for Hart to Hart), and both she and Robert Wagner had the classic Hollywood studio education that included all those skills - at least to the extent necessary to look good on film. In the case of singing and dancing, she was certainly more than just looking good on film, but really knew her stuff. In terms of sports, she used to be an accomplished polo player, and knew her way around on a tennis court, too.

Being of the same age as my Dad (born in 1942), Stefanie Powers looks back on decades of not only a very prolific acting career, but many friendships and relationships. She took care of her mother and her aunt until both their deaths, and had her own struggle with cancer. What she considers her most important work is not acting, but the William Holden Wildlife Foundation in Kenya. Much of the book is about her 9 years with "Wild Bill" and Kenya, far from the glamour and the cameras.

Her many travels all across the world are also included, and those were not the kind of trip where an entourage of staff would have looked after her every need; more the sleeping under a mosquito net somewhere in the woods type.