From Sunday to Sunday

Sunday a week ago was beautiful; sunny and so warm that many people we saw on our walk were showing off their (rather pale) bare legs and arms. A couple of young men, obviously fuelled not only by the sun's warmth, were even walking around with their shirts off - not really worth a second look, but they probably felt much more comfortable that way.

O.K., my sister and I walked to the ruins of the castle above Hoheneck and then down the hill into the historic center. I have told you about Hoheneck, the castle ruins and the book market before; the book market, usually a highlight in our town's year in September, has of course not taken place in 2020. But the seller of antiquarian books is still there, and with their outdoor shelves and a box for the cash, accessible all day, every day. 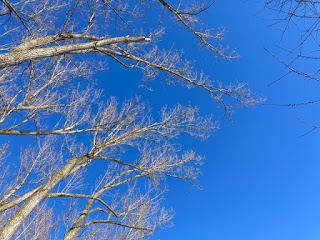 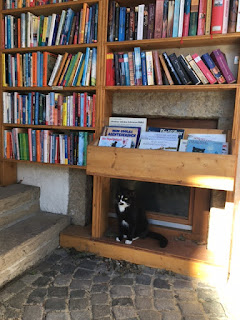 While my sister was browsing the shelves (and of course finding something to take home) and O.K. was sitting in the sun, I went inside the nearest restaurant - not open for patrons to eat there, but operating an order and pick-up service over the counter. We had not ordered anyhting, but it was possible to buy bottled drinks, and so I got us three bottles of shandy - always a welcome refreshment during a walk.

A friendly black and white cat kept us company for a while.

The sunny weather held all week, and I tried to get out between work calls or afterwards as much as the busy schedule allowed. On Wednesday, I only had a bit more than half an hour left before sunset, and by the time I reached the fields 15 minutes from home, both the moon and the sun were up in the sky. The milkiness came from the Sahara dust that had been around since the weekend. 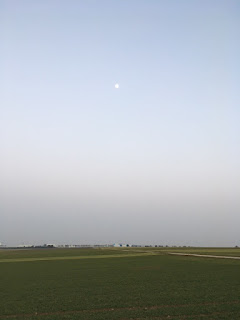 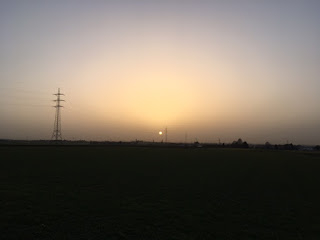 I had lunch at my parents' on Thursday, and my Mum served home-made lasagne - the best lasagne I had eaten in a long time!

After work, my sister and I went for a walk together. It was a balmy evening, spring-like in spite of it only being the 25th of February, and the moon was beautiful to look at. 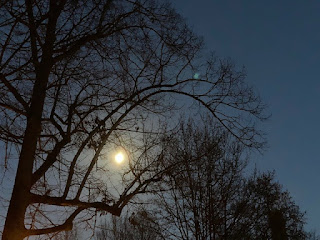 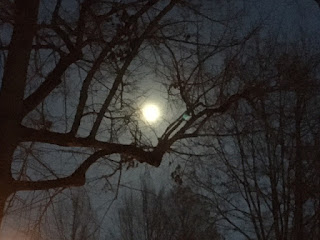 Friday was still sunny and beautiful, but considerably cooler. By the time O.K. arrived for the weekend at about 8:00 pm, it had become so chilly that I cranked up the heating, and we were glad about the spicy rice and vegetable wok dish I had prepared.

This month's Dalesman arrived just before the month was over; mail service between the UK and Germany has slowed down considerably since Brexit is beginning to show its full effects. I was of course delighted to see the cover: 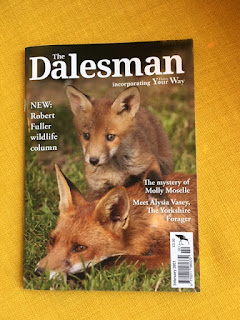 All weekend (and this week, by the looks of it), mornings and nights were cold to the point of frosty. It didn't stop us going for long walks on both Saturday and Sunday, but especially on Saturday, a cold wind blew across the fields, and I was chilled to the bones by the time we were home again.

Sunday saw us more or less back to where we had been the previous Sunday, only this time we did not go down the hill into Hoheneck, but took the path along the top overlooking the Neckar valley. 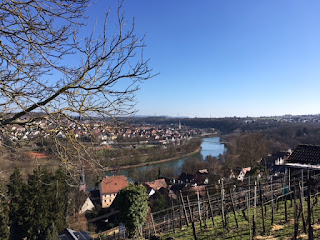 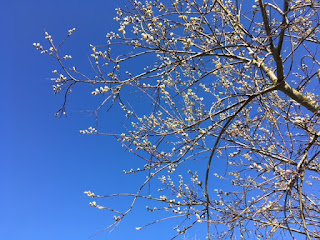 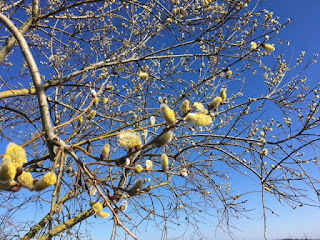 Everything is pointing towards spring now, and we enjoyed the sunshine and clear blue sky very much.

O.K. drove home just before 8:00 pm, and rang from the car shortly afterwards to tell me to look at the moon - it was still rather low in the west, but appeared very large and yellow. This picture taken from my kitchen window can only give a very poor idea of it; it was much more golden than what it looks like here. 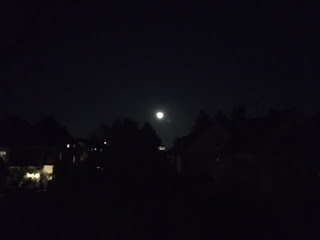 And now March is here, with a lot in store for me! Not just work, but many other things as well - more in another post :-)