A Week of Treats

Last week was full of treats - some expected, some unexpected.

Hairdressers were finally allowed to open again on Monday after having been in lockdown since mid-December, and you bet I was one of the first ones to have an appointment! My hairdresser is also my neighbour, and our relationship resembles a friendship more than a customer service one.

My last visit had been well before Christmas, and my grey-white roots were showing more and more week after week. I was determined to go all grey/white now and stop the colouring for good, but was advised against it; the part of my hair that was still brown would have required rather aggressive chemicals to get rid of the colour, and as I do not have much hair to begin with, we agreed on a scheme of slowly fading out over the next few months. Maybe by late summer/early autumn, my hair will be all natural, and I will only go to the hairdresser's for cuts, not colour. 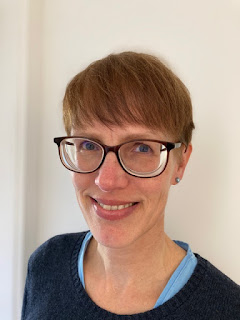 The day was beautiful, sunny and mild. I met my sister for a lunchtime walk, as we both had conference calls later on and well into the evening.

Tuesday began with temperatures below freezing, but it was another sunny day and warmed up to about 14C (57F). I had no meetings between 10:30 am and 2:00 pm, and treated myself to an early walk, extending my lunch break. 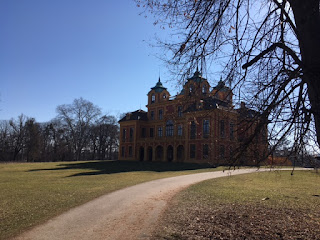 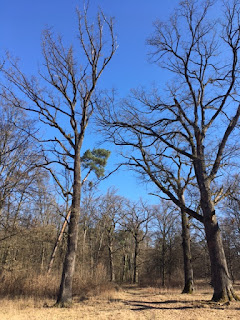 The deer park that has featured often on my blog is usually so popular on weekends that O.K. and I don't go there when he is here. On a Tuesday pre-lunch time, there weren't many people about, and I enjoyed every minute of that sunny walk.

On Wednesday, I was required to go to work outside my own four walls for the first time in months! It felt strange but good to take a train to work, and although the sky was a solid grey and it was a bit cooler than the day before, I took advantage of being in Marbach for work and went for a walk around there once the meeting with my client ended.

I went for lunch at my parents' on Thursday and an after-work walk with my sister, a mix of sun and clouds making for a beautiful sunset: 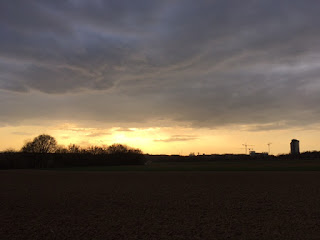 No walk on Friday, as I was busy after work with food shopping, cleaning and generally getting everything ready for the weekend. It was rather cold, with a sleety/haily shower just when I left the supermarket. O.K. arrived at around 8:00 pm.

All weekend was cold, but sunny, and so we decided against running but went walking on both Saturday and Sunday instead. Nowhere spectacular, as we left the car where it was, limiting our range of possibilities to familiar paths on the fields around town.

Cold days call for hot food, and so it was a chili with sweet potatoes on Saturday and something resembling mac & cheese on Sunday. 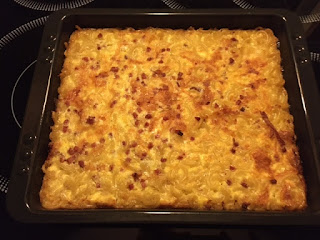 My part of Germany is holding a general election on Sunday, and my sister and I are volunteering, working at one of the many venues dotted around town where voters can go. We are rather excited and looking forward to this - it is something we have wanted to do for a long time. Having to get up very early on Sunday and being away most of the day and much of the evening, it makes no sense for O.K. to drive all the way here for the weekend, and so we won't be seeing each other until the weekend after.

Tomorrow, I am scheduled for an examination and planning my eye operation. That is an appointment I am not looking forward to, but it is necessary, and I know I will be in good hands at the clinic; it is the same where I was for my first eye surgery in 2018.

Have a good week!