Last Christmas, I had Barack Obama's "A Promised Land" on my wish list, and it was among O.K.'s presents. I was very much looking forward to reading it, and was not disappointed. But it took me ages - not only because this is a doorstopper of a book, but also because back when I started it some time early this year, my eyes were not yet operated and I could not read longer than 20 minutes at a time before it became too hard. 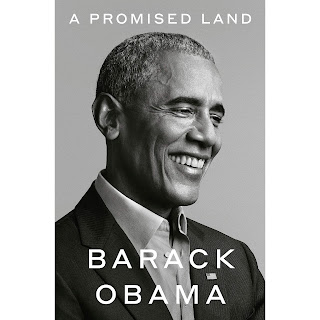 Years ago, I had read "The Audacity of Hope" by Mr Obama, and two years ago, "Becoming" by Michelle Obama (the clickable links lead to my reviews here on the blog). To me, the Obamas still stand out as people I admire, both as a couple and individually. Their values and hopes are something I can relate to; their work ethics, dedication to each other, their family and their causes are examples worth following.

They are both well educated, have sharp minds and good heads that can think for themselves on their shoulders, and it shows in their writing. Very different styles, but both highly readable.

A Promised Land sets out to enable the reader to understand what it is really like to be President of the United States, as far as that is ever possible as a second-hand experience (meaning, without actually BEING President). It is a political book, but it is also a very personal book. Its author does not try to make himself appear better, stronger and cleverer than he is; he is frank about his own shortcomings and doubts. When it comes to politics, he explains things in a way that even a reader who has not been following closely the events can understand them, giving them context and background. When it comes to his personal life and views, he reveals enough detail to relate to him as a person, but not in a yellow-press way.

What I noticed throughout the book are Obama's descriptions of other people, be it those who worked with him as part of his staff, other US politicians or the high and mighty of other nations: He draws their portraits with quick, strong strokes that - in my opinion - often build on stereotype images that may not be within the grasp of readers outside the US. Here is an example:

Short, owlish, with a smooth Kentucky accent, McConnell seemed an unlikely Republican leader. [...] Boehner was a different animal, an affable, gravel-voiced son of a bartender from outside Cincinatti. With his chain-smoking and perpetual tan, his love of golf and a good merlot, he felt familiar to me, cut from the same cloth as many of the Republicans I'd gotten to know as a state legislator in Springfield [...]. Nancy [Pelosi], in her designer suits, matching shoes, and perfectly coiffed hair, looked every bit the wealthy San Franciso liberal she was. [...] Her ascent to power had been no fluke. She'd grown up in the East, the Italian American daughter of Baltimore's mayor [...].

The book is divided neatly into seven parts, the parts into chapters, and the chapters into clusters of paragraphs that allow reading relatively short bits at a time without losing track of the overall thread.

There are two sets of pages with photographs, some well known, others from the Obama family's personal archives. It is a book I can highly recommend, and I know there will be a second volume at some stage, already on my mental wish list.

You can find more information and a number of short interviews with the author about his book (what he wanted to achieve with it, how the process of writing was for him, and more) at www.obamabook.com.