On one of the blogs I have recently begun to follow, the author shows pictures of his family which, even without the accompanying quotes and comments, reveal his love for them. Now, I'd love to show you a picture I took of my parents and my sister on Sunday, but they won't have it - I am strictly forbidden to post pictures of people other than myself, and of course I respect their decision in spite of not fully understanding it.

Still, I can tell you about what we did on Sunday, and show pictures of the event without letting you see my Mystery Family :-)

My home town Ludwigsburg is famous for its castle; I've posted pictures of it several times before, for instance here and here.
It is said to be Germany's biggest Baroque castle still standing, and visitors can go for a guided tour in the state rooms, something I have done so many times (and will keep doing) that I could be a tour guide myself.


Last Sunday, though, a small trade fair was held in and around the castle: several companies of Ludwigsburg and the surrounding area presented themselves and their products. There were stalls where you could buy food, such as the delicious Flammkuchen being baked on site in a big wood oven, jewellery, toys, clothes, Christmas and other ornaments, wine, cosmetics, lingerie and more; there was also a stall of one of several dance schools, advertising for new participants in their courses, a choir, a band and an exhibition about the challenges encountered and the methods used in restoring to their former glory the wall paintings, wooden doors and printed wallpaper serveral centuries old that adorn the castle.
Most interesting for me were not the people or the companies and their products, but the rooms we got to see - these are rooms not normally part of the tour, and I was able to see corners and stair cases and small rooms in the castle where I have never set foot before.

It was lovely to spend this sunny but cold November afternoon with my family, just the four of us, and I hope to convey some of it with these pictures - without acutally showing the most important people attending :-) 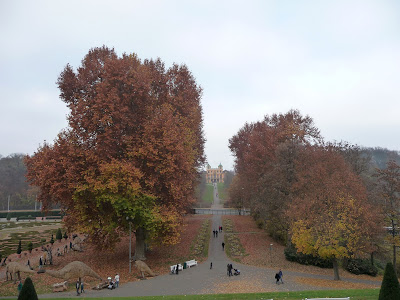 View from the South terrace/balcony towards the "tiny hunting lodge" that was built there in order for the Duke of Württemberg to have parties and dinners with his hunting friends and other guests.
It was still overcast when we arrived at around noon. The dinosaurs to the left are the remnants of the pumpkin exhibition and will not stay there. 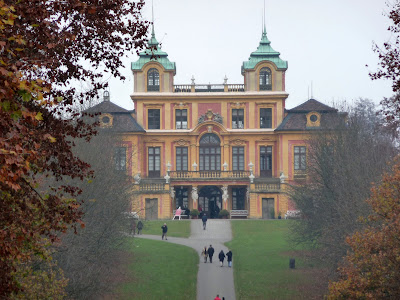 The same view, zoomed in. 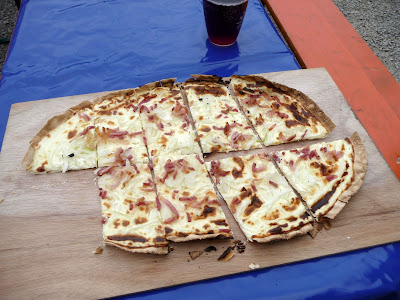 Flammkuchen, straight from the oven! There is mulled wine in the glass behind it. 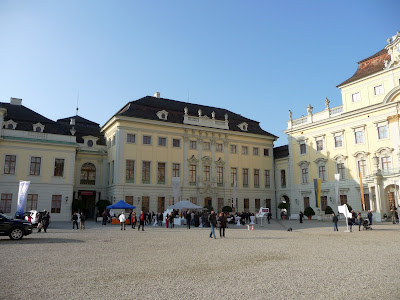 A little later, the sun came out, and it turned out be yet another glorious SUNday. Cars are not permitted into the inner courtyard of the castle; the one you can see to the left is part of a car dealer's exhibition that was allowed for the day. 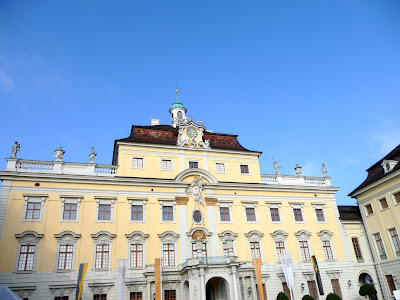 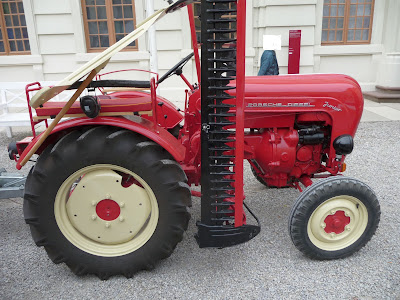 Ever wanted a red Porsche? Well, you probably didn't have this one in mind :-) 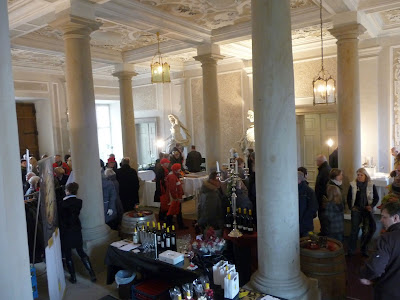 There will be a seperate post about some of the odd or beautiful detail I photographed, as well as the ceiling and wall paintings.
Posted by Librarian at 08:05