For two days in a row, we've had stormy, wet weather which made one want to stay indoors, and so that is what we did on Friday night.

As mentioned in my "Making Do" post, I like to use whatever I find in my fridge, and yesterday, those findings included several large carrots and some sausages plus a few remaining spuds in a bag in the cellar that really needed using up (the spuds, not the bag).
I had plenty of time, and so I thought why not try something I've never made before, something that is just right for a stormy evening in late autumn - soup!
(Not that I have never ever made soup before, just not of this kind.) 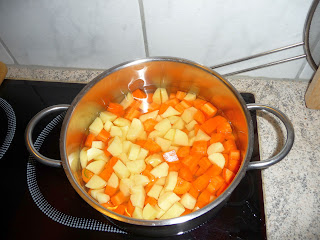 The spuds and carrots were peeled and diced and put into a pot with water just about covering them.
After I had let them boil for about an hour (I told you, I had plenty of time), with me replenishing the water twice so that the bits were always covered, they were soft enough to be easily mashed up with a spuds masher. 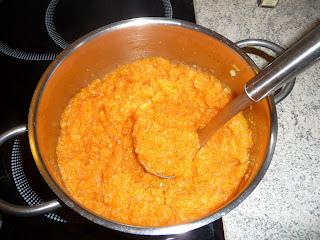 And then came the part where I cheated: instead of making this soup with home-made vegetable or chicken or any other kind of broth, I used the instant vegetable broth they sell at the supermarket. Sometimes when I am cold but too lazy to cook, I have a mug of this broth to warm me up and a slice of bread with it. 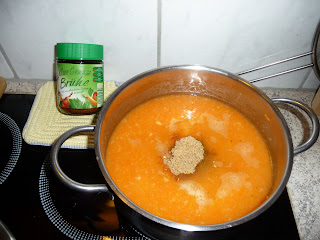 But the "cheating" broth was not the only spice for my wintery soup, of course. I had brought nutmeg and ground ginger from the Christmas market a few days before, and I used that, the result being a delicious but not over-spiced, warm taste and scent. 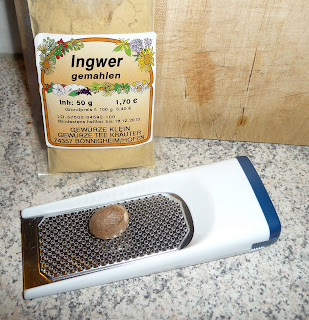 The soup needed to boil a bit longer, and RJ was not here yet anyway, so I used the time to dice a few slices of untoasted bread and fry it in a pan with some oil to make croutons. 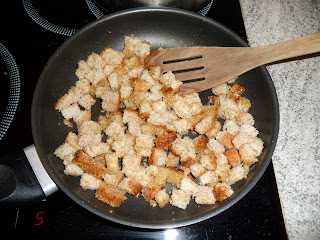 I had also fried a package of sausages I still had in the fridge, and we put those in our plates before the soup was added, and then the croutons. We had salad with that, and ice cream for dessert. 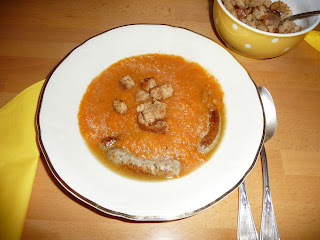 Although I'd never made this kind of soup before, I think this will not have been the last time; the result was really good.
Posted by Librarian at 20:10