Making do is something I usually do not find hard at all. It applies to many areas of my life, and is not always due to my, admittedly, rather precarious financial situation or lack of opportunity, but often brought about by myself quite deliberately, because I actually enjoy the challenge of making do, while a huge range of options and choices can be somewhat  overwhelming at times.

Much as I like new things - who doesn't? - especially clothes (these will one day be my downfall, I predict!), I do not always want new stuff. Instead, I really like using things until they literally fall apart, and if I was better (and had more patience) at mending and repairing, hardly anything would ever get replaced in my flat. For instance, part of my furniture belonged to my grandparents, bought in the 1930s when they got married; some of my kitchen tools (such as my favourite wooden spoon) are way older than myself, and appliances like my washing machine and microwave were bought in the 1990s for my grandma and used by her until she died in 2001. Only in 2008, when I turned 40, I changed my bedroom to new furniture I'd bought for myself - up until then, I had been making do with hand-me-downs from other family members and leftovers from my first marriage.

The area where I "make do" most often is in the kitchen.
When my husband was still alive, it was his pride and joy to make sure our fridge and the food cupboards were always well stocked, and he did almost all the cooking, with a few exceptions that were clearly my resort, such as Spätzle or pizza. So, after he died, getting used to providing my own meals was more difficult than I would have imagined, and while I never ran out of cat food, it did happen a few times that I did not have a single piece of bread left in the house, and it took a while before the simple fact of there not being any bread unless I got some sunk in.


Two years later, I have become better at keeping provisions, but there are still times when I open my fridge and it lookes like the typical single-household fridge, containing not much more than a few bottles of sparkling wine, a yoghurt or two, and a chunk of cheese. 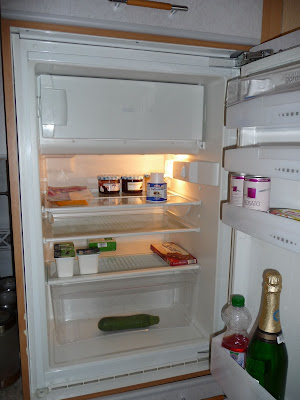 Sometimes, after a weekend with RJ (when he is here, we always have proper meals, since we enjoy both the cooking and the eating together), I have leftovers that we did not use, and since I hate throwing food away, I like to make something with whatever I find in my fridge during the week.

A while ago, those findings included a small zucchini and (not surprisingly) some cheese, and I knew just what this was going to become: 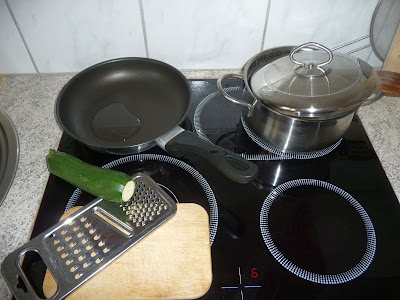 While I was boiling some pasta, I grated the zucchini into a pan with a little olive oil and added some salt and pepper as well as a dried herbs mixture (containing, among others, Oregano). 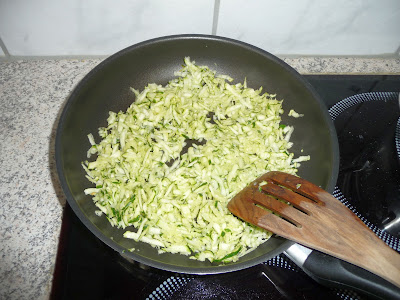 By the time the pasta was ready, I had diced the cheese and stirred the grated zucchini a few times. Now I added the pasta and the diced cheese and kept stirring until the cheese was melted. 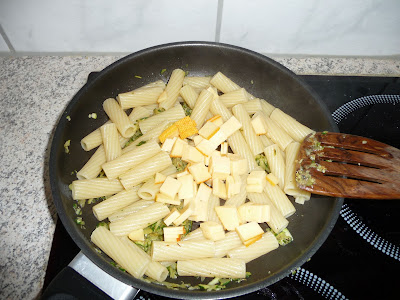 It smelled and looked quite nice, and was tasty, too! 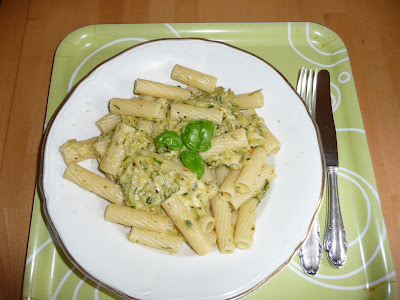 For dessert, I had coffee and a slice of my mum's home baked apple bread (more a tea cake than a bread, very delicious and sweet). 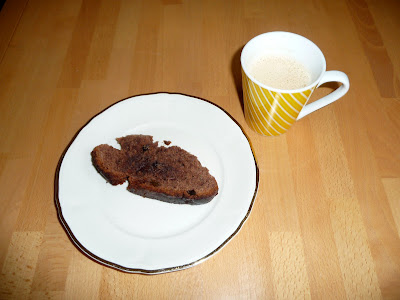 Yes, I like to make do - every time I start, the result is a surprise, but so far, it has always been a pleasant one.
Posted by Librarian at 17:37