This is the continuation of my holiday report from Lake Garda. If you have missed the previous posts or can't remember what we last did, simply click on the label "Travelling" to find them listed.

Walking regularly features on my blog, such as when I told you about a long walk I went on earlier this year, or when I was walking in the rain. So, if by now you can't bear to go on yet another walk with me, I advise you to skip this post and wait for the next one, which should be a Fashion one :-)

The place is still Lake Garda, Riva del Garda, to be more precise. The date is Friday, the 8th of June.
From the evening of our arrival, we have been looking at the ruins of a castle from our hotel room, high above us on a steep mountain slope:
(our room was at the back of the hotel; what you see here is the front with the glass-covered breakfast room) 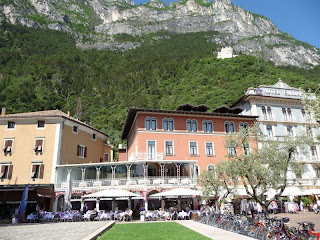 It looked like a challenge to get there, and we were ready to face it today after breakfast.
To our surprise, we found the castle to be easily accessible by a well-paved path winding up the slope in serpentines that were not too steep even for families with children; it took us maybe 25 minutes to get to the top.
Twice, we stopped underneath large trees to shelter from the rain that kept falling on and off, and also to take some pictures, both of the view across Riva as well as of this abandoned house which - you guessed it! - very much appealed to me: 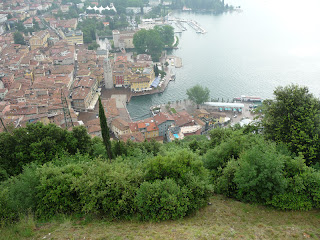 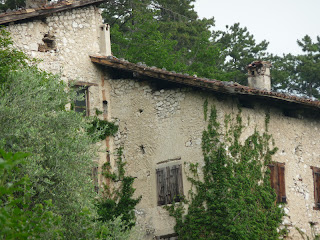 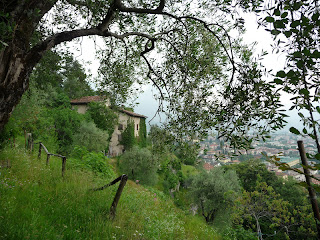 At the top, the castle ruins were open to be explored, and since it had begun to rain once again, we waited for a while in the one area that still has parts of a roof. 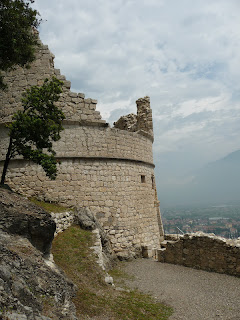 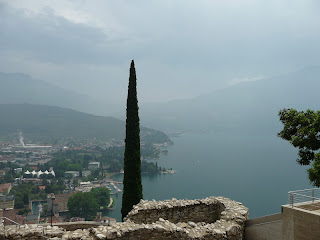 The sun made some brave attempts to come out, and we decided to go back down on the same path and then find our way to a waterfall I had been reading about in my guidebook. It was described as a walk along the Sentiero Ponale, a path/road leading along the lake, and sounded like a nice little walk - just what we wanted.


So we set off, water bottle and a handful of roast almonds and of course the camera in our bags, as well as the small umbrellas we'd be quite sure we were going to need at some stage.


The Sentiero Ponale is important enough to have its own website, where you can look at pictures and read up on its history - if you understand Italian, that is. If not, let me give you some background:
Giacomo Cis, a wealthy merchant who found himself without a heir, decided in 1848 to use his economic (and, along with that, political) influence in the area to have a road created that would finally link the Valle di Ledro to the rest of the world. Up until then, the people who lived in the Ledro valley had been isolated by the geographical nature of the place, and travelling across the rough mountains there had been really difficult and dangerous.
In 1851, Mr. Cis died, just when the finishing touches were given to the road. It was opened to the public shortly after his death.

The road soon became well-travelled not only for its practical use, but also for the spectacular views it offered at every turn. For a long time, it remained open to everyone, until in 1990, it was closed because it had become too dangerous, with extensive repairs having become necessary to the many tunnels and the path itself. In 2004, it was re-opened - but only to people on bikes and on foot, not for cars.
Since then, it has become a hugely popular route for mountain bike enthusiasts, something we did not know until we found ourselves faced with bikes racing towards us almost every step we took, which made it rather difficult to fully enjoy the walk and the views.

It started to rain more frequently and heavier as the afternoon wore on, and it took us a long time to get to the waterfall mentioned in my guidebook. By then, we were - in spite of our umbrellas - quite wet, and exhausted not so much from the actual walk but from the constant state of alert we had to be in due to the cyclists who were, I must say, quite inconsiderate not only of each other, but even more so of anyone else who was not on a bike, in spite of big signs along the path that warned them to reduce speed at the narrower and steeper bits and to be aware of others who had just the same right to be on the path as they did.

For about half an hour or a bit longer, we walked further up with our map, thinking we'd make it to the next small village and maybe catch a bus (or even a taxi) back to Riva from there, since we didn't really want to walk back the same route. 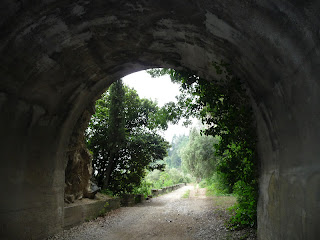 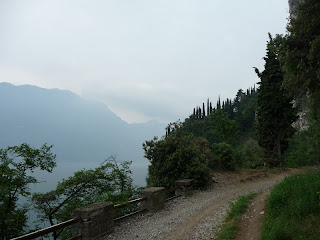 In the end, we decided it was too far to get to the next village, turned around and walked back all the way. It wasn't so much the distance (we estimated our whole walk to have been somewhere around 14-16 km long) but the combination of rain and cyclists that made us arrive at our hotel quite worn out.

The pictures I have taken - this is only a small choice, there are more on my photobucket album; simply click on this picture and then "next" to see them - hopefully show what a beautiful place it actually is.
With the damp warmth it almost felt like walking in a rain forest in some tropical country. 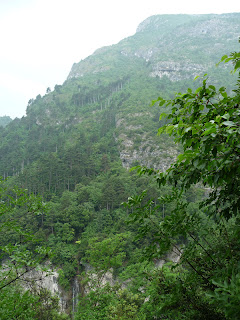 This building puzzled us - what would you think it is (or was)? The ruins of a palace, or a monastery of some kind? 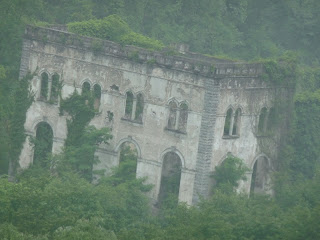 Well, I found out it used to be a hydro-electric power plant, built in 1905, to make use of the steep drop of the Ledro river into the valley.


We had a good rest at our room, showered and changed before we set out to find ourselves some dinner. And later, all tiredness was forgotten when we discovered that a band was playing on one of the smaller piazzas in town, and we danced on the square along with dozens of others until they packed up their instruments - it was, all things considered, a great day with "a nice little walk" and ended with us dancing under the stars!
Posted by Librarian at 08:36