Although I have been travelling the whole length of the Italian "boot" many times (see my Souvenirs from Sicily), up until very recently, I had never stopped in the northern part of the country before.
A week ago today, RJ and I returned from our holiday in Riva del Garda, and I am going to show you some pictures of the town and tell you about the time we spent there.

When I told people that we were going to go to Lake Garda, they often said I was going to find it rather "German", compared to those parts of Italy I know better (namely Sicily); "German" not only because of my co-nationals being the largest group of tourists there, but also in terms of how tidy, neat and organized everything is.

Now, when I travel, my aim is not to spend my free time among crowds of other Germans, nor to eat German food in a foreign country and speak only German; I am fluent in Italian, I like Italian food (who doesn't?!) and am glad to report that, in spite of there really being many, many other German tourists in the area, it did not really "feel" like Germany.

But let me get back to the original intention of this post: to tell you a bit more about Riva and show you some pictures.

According to the guide book my sister kindly lent me, Riva is the third biggest town on Lake Garda at about 16.000 inhabitants. It is also its northern-most town, with the mountains right up to the rim of the lake, surrounding the town so closely that, once the heavy clouds are there, they stay put for a while... as we were to find out during the 2nd half of our week. 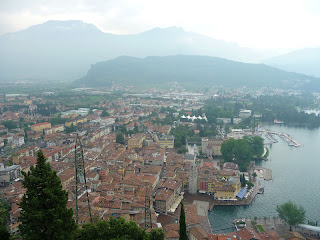 When we arrived, the view was beautiful with blue sky and the evening sun across the lake. 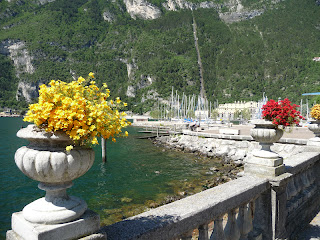 Already a settlement in Roman times, Riva gained some importance in the 11th and 12th century. Some of the buildings from that time are still there, such as the Torre Apponale (Apponale-tower), built in 1220, and the Rocca, a sturdy castle surrounded by water on all sides. 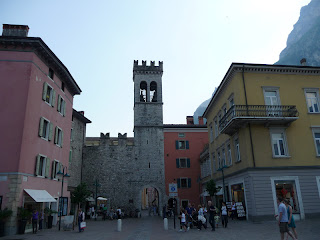 The medieval town centre is full of more or less narrow, curved streets, most of them cobbled and paved, and there are many restaurants, bars and shops to choose from; really something for every taste and every budget.

Just a bit further out, newer and larger houses, private residences as well as palace-like hotels, show that this used to be a popular place for European aristocracy and celebrities when they were in need of a rest; many well-known German names from art and literature have once been inscribed in the guest books of hotels. pensions and sanatoriums.

Many of these places are now empty; if you have been reading my blog for a while, maybe you know that I have a thing for abandoned houses and neglected, overgrown gardens. It was sad to look at them but exciting at the same time, trying to imagine what they once were like, and what I would find there now if I went inside to explore. 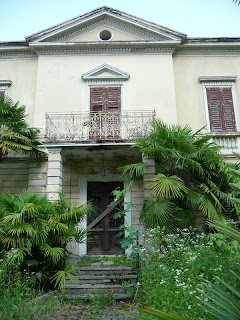 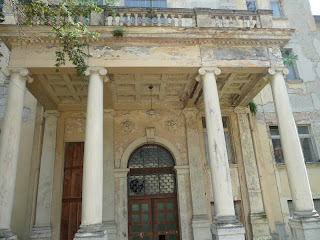 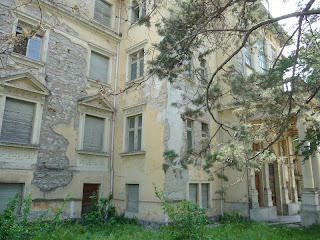 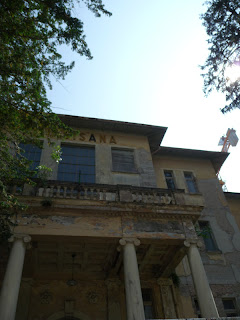 We did not stay in Riva during the day but usually went somewhere else, either on foot or by car, and returned to the town in the evening.

More about our excursions will follow in the next posts.
Since I won't put all the pictures on my blog, if you are interested in seeing them, simply click here for my photobucket album.
Posted by Librarian at 16:48