Does it sometimes happen to you that you start reading something and never finish it, because you are too bored or the style is too awful (or for some other reason)?
It did happen to me yesterday.

When I was on my Kindle downloading spree earlier this year, one of the 80 or so books was "Banzai" by Parabellum (which is the pseudonym of an author named Ferdinand Heinrich Grautoff). 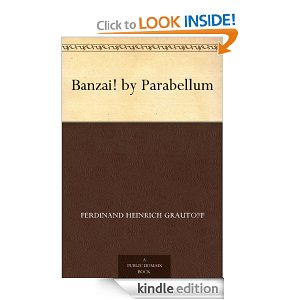 This English edition was published in 1909 in New York. I was looking forward to the elegant language of the time (and, stylewise, was not disappointed), and found the foreword rather intriguing. Among other things, it says


That the Pacific Ocean may become [...] the Peaceful Ocean, and never resound to the clash of American arms, is the devout wish of one who believes - implicitly - with Moltke in the old proverb, Si vis pacem, para bellum - If you wish for Peace, prepare for War.

This apparent contradiction (and I'd heard this particular proverb before) and the connection the author would make to the events described in the book - which I took to be for real, after having read the introduction - was what interested me in the story.

And it began interestingly enough. The settings change from an officer's club in Manila, where the gentlemen are so bored out of their minds by their military routine as well as affected by the tropical heat that all they manage to do in the evenings is drink whiskey and smoke, to a tiny train station in the middle of nowhere in the Oregon prairie, to the office of the rich owner of a factory producing pianos in New York, to the post office in San Francisco where telegram boys wait their orders, trying to keep awake on a sleepy Sunday morning.

Then, though, the military part takes over, and a seemingly endless series of troop movements, ship's names, strength of batteries and all sorts of war tactics follow, and I am not so keen on that. I skipped a few pages, only to find more of the same, and eventually decided to let it drop, when I was just short of being half way through the book.

As I said, I thought the events described were real. But when I did research this particular period of time on the internet, everything that had to do with a Japanese-American conflict lead to Pearl Harbour; there were references to massive anti-Japanese sentiments (and terrible riots) and racist legislation in the late 1800s and early 1900s (the book being set mainly in 1907), but not going as far as open war being declared between Japan and the US. And finally having found out that Mr. Grautoff originally wrote his story (in German) in 1905, of course the events he describes as to having taken place in 1907 can't be anything than fictional.

Maybe someone who really is massively into all things military appreciates "Banzai" - I certainly don't.


For some lighter reading, I started then on "The Morrow Plot" by Sarah Wisseman. 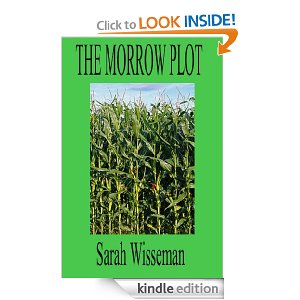 I had made the mistake of never checking the length of the book and expected a novel - and was surprised when it came to a sudden end after less than half an hour's worth of reading. Not the author's fault, of course, but I think "The Morrow Plot" could have profited from some filling in of character's descriptions and a bit more of a story to it. It is supposed to be an archaelogical mystery, but there is really nothing much mysterious about it, and therefore, I was a bit disappointed.
Also, for a text so short, there were way too many typesetting errors in it. Sarah Wisseman should definitely talk to her editors.