You guessed it - another free title from the Kindle store that found its way onto my Kindle in spring: 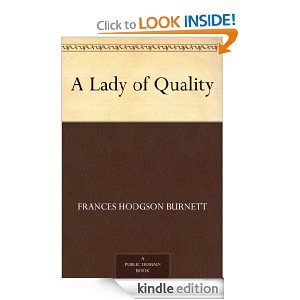 "A Lady Of Quality" by Frances Hodgson Burnett.
If, like me, you loved the author's "Secret Garden" as a child, you will be surprised by this book; it was published in 1896 and, unlike her most famous books, not aimed at children.

Meet Clorinda Wildairs, born in 1690 to an uncaring brute of a father and an unloved mother who dies right after giving birth to her, almost taking her with her.
Clorinda grows up without any female to turn to for guidance; the only "education" she receives is from her father's servants, who succumb to the little monster's every whim, and teach her how to swear, ride and drink at a very tender age.
Nothing is tender about Clorinda, though; she is physically as big and strong as mentally, and only when she is already six years old, her first encounter with her father finally makes him acknowledge her.

As she grows up, she becomes more of a ladette every day, much to her father's and his drinking and riding companions' amusement; but at some point in her teenage years, she decides she wants to escape this way of life, and knowing full well that the only way is through marrying well, she improves herself to the point of becoming the most sought-after beauty of her time.

This improvement seems really too good to be true, and deep down, Clorinda's character changes little - at first. She still has her iron will, matched by an iron hand with which she rules over her household. But then, the inevitable happens:
She falls in love...
...and of course, that changes everything, and Clorinda turns into something that can hardly be described as human anymore.

All those lovely qualities now present in her are so unlikely, making her a super-heroine and not a credible human character anymore.
Her new, super-holy and super-happy life is endangered by someone revisiting her from her past, but she deals with that in a manner that the author clearly intended to be surprising, with a "mystery" twist to it that is revealed only at the very end of the book, but to be honest, nothing about it was really surprising or mysterious.

I did stick with the book and not break off midway through (as I was tempted to do a few times), because I confess I wanted to know whether Clorinda was going to be found out or not. F. H. Burnett clearly wanted to give this book the impression of an authentic account, written shortly after the events had taken place in the late 1600s and early 1700, and used a style and language she obviously thought would have been used in those days, 200 years before her lifetime. I don't know how successful she was in emulating the writing style of the Queen Anne period, but it does get a bit much when nearly every sentence starts with " 'Twas so that..." and people ask each other "what dost thou mean?" and so on.

My overall verdict of this book was: too much of everything. Too much "old fashioned" style, too much of the bad at first and then the good in the heroine, too much dramatic emotion, expressed in too much of a dramatic language to make the characters feel life-like.
What a contrast to "A Fair Barbarian", which I reviewed here; just goes to show that one can not rely on liking a book simply because one likes other works by the same author.
Posted by Librarian at 08:37