This was not my first Nicci French book, but it was quite different from how I remembered the ones I have read previously; they were somehow darker (don't get me wrong, this one is dark enough), more on the "thriller" side. But it could just be my memory, since it's been many years. 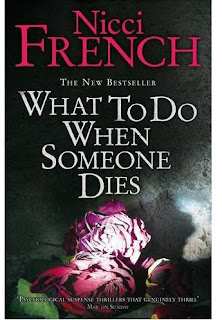 "What To Do When Someone Dies" was recommended and given to me by my Mum who bought it at a church sale for 1 Euro. She said she often thought of me while reading, and wanted me to read it as well. Now, her thinking of me is not so surprising if you know that the basic storyline is about a married woman who becomes a widow very unexpectedly, tragically and way too early in her life (at 34), and if you also know that I became a widow very unexpectedly way too early in my life, almost three years ago when I was 41 and came home from work one Thursday evening to find my husband dead on the floor in our living room.

The parallel is obvious, and there ARE a lot of parallels, but of course this wouldn't be a Nicci French book if it wasn't built on a mystery: Ellie's husband died in a car crash (nothing mysterious about that, I hear you say; it happens every day), but there was a woman in the passenger seat who nobody knew, and who had apparently no connection at all to Greg.
Of course, everyone jumps to the easiest conclusion: that Greg was having an affair with the woman, and when Ellie refuses to believe this and instead starts to investigate on her own, her friends and the police all think she reacts this way because she is beyond herself with grief and simply can't accept that the man she loved so much was cheating on her.

Ellie goes about her investigation thoroughly and systematically, and in the end she does find out what really happened. Until she reaches that point, two more people die, and she herself almost becomes the fifth victim.

Some bits about Ellie and the way she reacts to her husband's sudden death are very credible and did indeed remind me of myself: how she tries to capture his scent from his jacket, how she opens the fridge and looks at all the things he liked to eat, how she truly does not want people about her all the time but needs time on her own, how she feels when tidying up that everything she clears away means losing a bit of the life they had together. When my husband was still alive, he did all our washing and ironing (as well as the shopping, cooking and cleaning), and I remember very well how I stood in front of my wardrobe, looked at my pretty summer dresses (he died in November) and thought that these were all still ironed by him and one day I would be wearing them again, washing them and then, piece by piece, all the items that had still been dealt with by Steve, would be replaced by items I had washed and ironed myself.
I also can relate to how she does not necessarily conform to how everyone else expects her to react, to play her role, and how she dislikes people making thoughtless remarks and watch her closely with a somewhat perverse interest in wanting to see her crumble and cry, because she MUST crumble and cry at some stage, doesn't she?
An acquaintance of mine came over a few days after Steve's death, to "cheer me up". What she did was telling me in all detail about how her mother died several years ago. Much as I appreciated her visiting me, I must admit I wasn't particularly interested at that moment in hearing of her late mother. Maybe that was cold-hearted of me?

There is a lot more about Ellie to which I can not relate, one of the things being her seemingly constant drinking, either on her own or with her friends, and how hard she finds it to keep the house clean and warm, does not dress properly for the cold weather and opens her door to everyone who rings the bell without checking who it is.

Also, Ellie seems to look at the way things are done at the crematorium with contempt because group after group are having their funeral services, and there is a slightly accusing note in her observation of how other people go on with their normal lives and do their jobs. Well, that's life for you, I'm afraid. The world does not stop simply because a young man died in a car crash in London and you are now a widow. It didn't stop for me, and it does not stop for the thousands of people who die every second, some in such atrocious ways and horrible circumstances that it hardly bears thinking about.

A few details in the book don't really match, and I wonder why they weren't spotted by an editor. For instance, at one point Ellie is said to have no money for food, and only a few pages on she goes and buys herself a mobile phone. Also, she always seems to have enough money to go to restaurants for meals and drinks with her friends. Another detail I can't find credible is when one evening her friends drop in, bringing groceries (now that is, of course, entirely credible and very nice of those friends) to Ellie's kitchen. While they talk, the shopping bags are put on the table, and one of the friends starts chewing on a carrot from the bags. Now, come on! Nobody does that, do they? If you eat a raw carrot, you peel it first, you don't simply grab it from the shopping bag and start chewing on it, do you? Sorry - but I do like the details to be right.

Fairly early into the story, I was quite sure who was behind Greg's death and that of the mystery woman, and I was right. That didn't take away from the book, though. I liked it and found it good company yesterday, when I spent about 2 1/2 hours on various trains for going to see a customer and on the way back. It will go into a parcel I am going to send to my mother-in-law; I imagine she will like it.
Posted by Librarian at 19:50