Oh no - not another one, I hear you groan. Yes, there have doubtlessly been too many reviews of 2012 and previews for 2013 on telly, in papers and magazines, and of course, we of the blogging folk are not immune to them.
Still, I am going to do one now, and if you're sick and tired of anything that reads "...of the year" (such as "Actor of the Year", "Sportsman of the Year", "Most Tragic Event of the Year", "Game of the Year" or "Funniest Joke of the Year"), I promise there won't be any of that in my review.
Instead, I am using this post on Kristi's blog as an inspiration, plus adding my own bit to it.
For every month, you'll see the first sentence of the first blog post of that month, plus a picture of my diary with the first week of each month.
(Of course, a month does not only consist of its first week, and if you want to find out more, you can always read the post full length by going through the blog archive to the left of the page.) 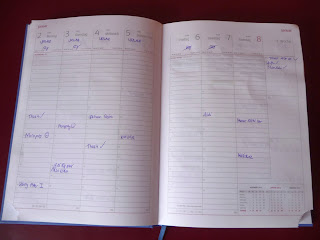 The month started with a very quiet week; I did not work again until the 9th. RJ spent the first part of the week with me. We played Monopoly (I have a Star Trek edition, complete with tiny figures of the main characters from "The Next Generation"), I had physiotherapy twice that week, went to the gym twice, for a walk with my sister, did my groceries shopping - you get the idea, nothing out of the ordinary.

February
Today, I have something special to report: I (or, rather, my blog) has been featured!!! 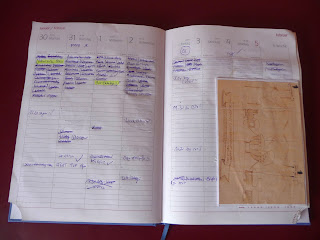 Strictly speaking, the highlight of that week was still in January and not in February: my Dad's 70th birthy on the 31st. What you see on the right of the diary page is the invitation to the party (of course I didn't need one, being family, but it was still nice to have one!). The picture on the invitation is a print-out of a drawing a friendly soldier made on the train in 1942 when my Dad was a newborn baby and his mother was travelling with him through war-torn Germany. It shows a train with a pram in the middle as one of the waggons, and bears the headline "Wolfgang's erste Eisenbahnfahrt" (meaning "Wolfgang's first train trip"). I find it quite touching that this piece of family history still exists - how easy it would have been to lose it, misplace it, or just chuck it out.

I spent one day of that week at the office, 2 1/2 hours by train from my home. I wrote "Chaos!" there, and remember that there was something going on with the trains, and it resulted in me arriving at the office over an hour later than planned. The crossed-out stuff you see on each working day are the names of customers I had planned ahead to ring, and crossed them out after I'd made the call.

March
A week ago, I was physically and mentally desperate to get OUT after not only a whole week spent mostly indoors but what felt like months and months of inclement weather that made it necessary to prepare for even the shortest venturing out of the front door as if it was a polar expedition. 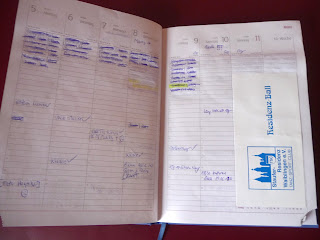 Joy and grief were closely together for me during the first week of March: My poor little old Pukky died mid-week, and on Saturday night, RJ and I went to my first (and, so far, only) ball. Also, on the Monday of that week, I received news that someone I consider to be one of my closest and dearest friends was in hospital for something that could have very well meant the end of his life (thankfully, it didn't!).

April
All of this week, we've had sunshine and temperatures up to 20 Celsius (68 F) - in other words, wonderful spring weather. 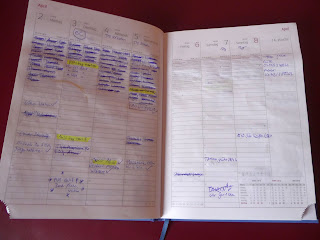 On Tuesday (after another day at the office, this time with smooth travelling), my team and I came 2nd in the Pub Quiz. The weekend saw RJ giving me a dance lesson in my living room on Saturday (we had wanted to go dancing, but the place where we usually go to was closed), and Sunday for an Easter family gathering at my parents'.

May
The daftest thing happened - and I do fully well understand now how John and Graham get so fed up with blogger sometimes. 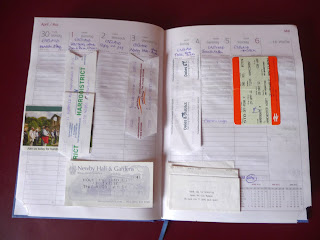 With my sister, I spent the week in Ripon (Yorkshire), visiting family and getting to see many beautiful and interesting places. It was freezingly cold, but we still had a great time.

Yes, that's it, the last post about our week in Yorkshire. 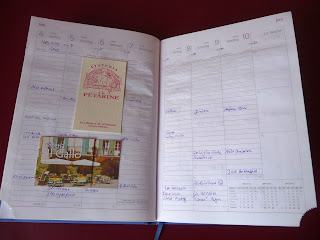 The first week of June saw me travelling again, this time to Lake Garda in Italy with RJ.
July
This post is going to be rambling style, taking a leaf out of Scriptor Senex's book, so to speak; if you have not yet been to his blog, please make sure you go there, and I am quite certain you will not regret it. 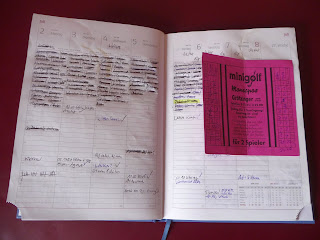 A rather typical week for me: I worked, went to the gym, went running, dyed my hair, had lunch at my parents', went dancing with RJ Saturday night and had great fun earlier the same day playing adventure golf together.

August
Does it sometimes happen to you that you start reading something and never finish it, because you are too bored or the style is too awful (or for some other reason)? 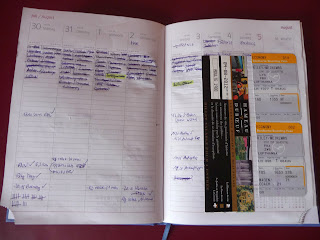 It was once again time to dye my hair, to work, go to the gym, do some running, have lunch at my parents', and travel: to France this time, where my sister and I were to meet up with our friends from Australia.

September
Before August came to an end, my Mum and I did what we so enjoy doing and went on our favourite walk together, just like we have done in 2011 (you can join us on that walk here) and in 2010. 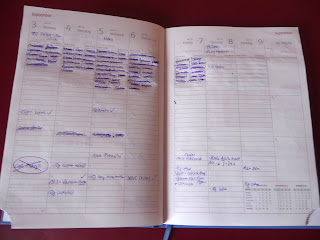 A busy week with a lot of work, sports, an appointment at the hairdresser's, RJ staying over (and cooking dinner while I was out running) and, on the Saturday, the book sale.

October
Something I had not eaten in... oh, at least ten years: Polenta. 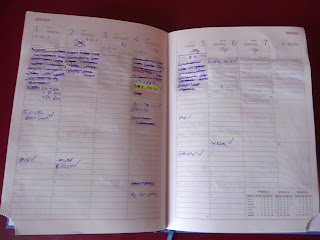 A decisive moment during that week was when I handed in my notice with the former company during a visit from my boss. Apart from that, I went to the gym twice, to the post office three times (you can tell I was doing some stuff on ebay at that time!), and to my parents for lunch. Sadly, RJ's grandmother died that week, resulting in a change of plans to our weekend.

November
It was on Nan's blog that I first learned about Maeve Binchy's death, and Nan has also posted several reviews of her books; this one is among them. 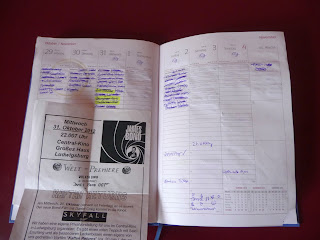 RJ and I spend a lot of time together that week. We attended a privately hosted première of the latest Bond film, went for dinner at a Turkish restaurant and had plenty of fun on the dance floor on Saturday night. After a late and lazy start on Sunday, RJ worked (with me helping a little bit) until 11 pm.

December
With these two finds of free ebooks on Amazon's Kindle store I was really lucky - they were both very good reads, and I am glad the author, Tamara Hart Heiner, did not stop writing after "Perilous" but instead wrote a sequel, "Altercation". 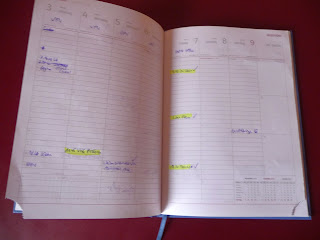 The first week of December was also the first week on the new job. On Tuesday night, my Mum, my sister and I took a course in making your own pralinés. Friday was a day spent working from home, with an routine check-up appointment at my doctor's in the morning and a massage appointment in the evening. I went visiting RJ on the Sunday.

Well, that was my little review of 2012, based on my blog and my diary.
If you are still awake and have not yet fallen asleep out of boredom, I hope you'll keep reading what I'll post here over the next 12 months - right now, I know no more about what it is going to be than you do :-)
Posted by Librarian at 15:00