For me, any empty house, neglected, overgrown garden, ruined barn or otherwise forgotten, abandoned place is a Place of Interest. Why I have this penchant for such places I can't tell; all I know is that I have been feeling that way for as long as I can remember.

One particular situation when I realized that abandoned places hold special attraction for me was when I spent an unforgettable holiday on the Danish island of Bornholm in the early 1990s. One of my aunts has been living there for decades; we spent summer holidays there as a family when my sister and I were in our early teens, and I remember that time well.
When I returned more than a decade later, now a married woman, I rediscovered the area and enjoyed every minute of it. My aunt and uncle used to live on a former farm; the old stable was converted into a guest house, where my husband and I were staying. The nearest neighbour was more than a mile away (which is why in the meantime, my aunt and uncle have moved into town, where they are closer to all the conveniences they need, now that they are in their 70s and 80s).
The summer I was there for the second (and so far last) time, the working farm next to my aunt's had been abandoned the previous year. Not because the farmer's family didn't feel like farming anymore, but because the land was acquired by the local government and to be used for re-forestation, something very important for the ecological balance of the relatively small island.

So, there it was - an old and recently abandoned farm house with several outbuildings, an overgrown orchard and a garden. Paradise!
Nearly every day between returning from the beach and getting dinner started (and sometimes again after dinner), I spent some time alone in the grounds. There was nobody about except for the odd pheasant, many other birds, a few lizards and lots of butterflies. It was very quiet, and there were still plenty of flowers in the garden, giving off their scent in the warm afternoon sun. I have never tasted strawberries more aromatic and sweeter than those I picked in the abandoned orchard. It was magic, and I wanted to stay there forever.
Anyone who looks at the place now will not suspect that there ever was a farm there. The buildings were pulled down a year or so later, and the efforts to re-forest have been successful.

Since that summer about 20 years ago, I have come across many more Places of Interest. Sometimes, a fellow blogger writes about such places. I will, in all likelihood, never visit there personally, but the excellent pictures and very good descriptions nearly make up for that and have almost the same effect on me.

Over the past two or three months, I have taken pictures of several abandoned houses, dotted around the greater Stuttgart area (none of these buildings is in Ludwigsburg). Although I would have loved to, I didn't venture inside any of them. The main reason for not going inside is of course that they are either locked up, unsafe or both - and it would certainly be illegal to enter what is still, after all, someone else's property. But there is also another reason: I'm afraid I'd be severely disappointed if I really managed to get in.
Probably all I'd find inside would be heaps of rubbish, dead rats (or worse) and none of the morbidly romantic settings I see in my mind when I look at them from the outside. 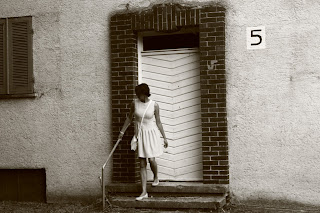 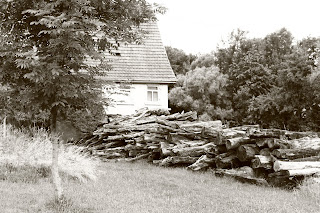 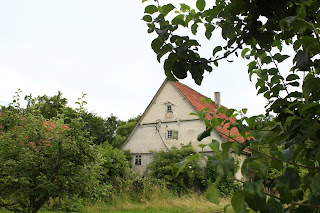 So, to spare me this disappointment - not to mention a possible lawsuit -, I'll stick to admiring my Places of Interest from the outside.
Posted by Librarian at 19:06