Reading this book was a premiere for me - not only because it was my first encounter with the author and her life, but also because of the language. Let me explain. Whenever possible, I read books in their original language, which is no problem when the book is in either German or English. I don't trust my abilities to read French enough for an entire book, and my last read in Italian is many years ago.
Every now and then, someone gives or lends me the German translation of an English book. I can't help but notice the quality of a translation; some are very, very good, others are acceptable (meaning the translation does not take away the pleasure of a good story), while others still are so full of mistakes (or at least unlucky choices) that I really regret not having read the original. 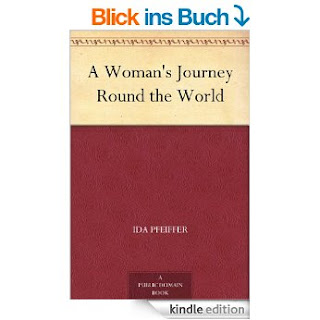 Ida Pfeiffer's book was originally written in German, but the free copy I found at Amazon's kindle shop was translated to English - the first time ever for me to read something translated "the other way round".

When little Ida was born in 1797 in Vienna, she was the only girl in the family. Her father took the education of his children very seriously and, up until a certain age, made no difference in the way Ida was brought up from that of her five brothers. She liked the rough and tough games with the boys, the comfortable trousers and the orderly, almost military, emphasis on discipline and (physical) strength, things that would serve her well later in life.
Upon entering puberty, she was - with some difficulties - persuaded to live like a girl: wear dresses, behave demurely and properly, learn sewing and cooking, etc.

She married and had children, but was far from well provided for by her husband. On the contrary, she had to work very hard to even just care for the most basic needs of her family.
After she became a widow, received an inheritance from her mother's side and her children were old enough to look after themselves, she finally made her life's dream come true: To travel and see the world. From early childhood, learning things, seeing places, meeting people and see how others live had been her yearning. She still wasn't well off financially, but she scraped together just about enough to set off on her first long voyage.
Ida wrote down what she saw, heard and felt during the trip, and was encouraged to sell her travelogue. Of the proceedings, she saved as much as she could; also, she spoke to interested audiences about her travels, which not only added a little to her meagre income, but also made it easier for her to find sponsors willing to help finance her next trip.

In "A Woman's Journey round the World" (first published in 1850), she describes her first trip around the world, a 2-year-long voyage that lead her across "The Brazils" to Chile and Tahiti, then to China, India, Mesopotamia, Persia, Turkey, Russia and Greece before returning to Vienna.
Ida did not only show great courage and readiness to deal with all sorts of hardships (imagine being on a tiny sailing ship with no mod cons for weeks on end, without fresh food, clean clothes or even a bit of privacy, plus totally subject to the weather and the captain's mood). She was also a keen observer and noted down in much detail what she saw, heard and learned. Whatever crossed her path and piqued her interest, she collected: plants, insects, minerals, and so on. Everything was carefully documented and upon her return sold to museums in Vienna and Berlin.

Back then, political correctness had not yet been invented, and Mrs. Pfeiffer's comments about natives and fellow travellers range from the humorously frank to the outright appalling. She has no trouble in calling nearly every people of a skintone darker than her own "ugly", and it is rare to find favourable comments about the looks of natives. She grew up with such racist views and, like most people back then, never questioned them. She was, however, not totally blind to the merits and wrongdoings of others. For instance, she highly praises the kindness and hospitality shown her by those "pagan" and "savage" people she encounters along the way, while she does not hesitate to condemn the hypocrisy of her fellow Europeans who call themselves Christians but behave badly towards the natives in whatever country they come to, and sometimes towards herself. 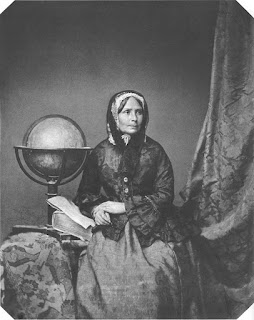 A few times, she encounters real danger, but most of the time, being obviously a relatively poor, elderly woman serves as her protection, and she is largely left to travel in peace, seen as a curiosity worth looking at, but not worth capturing, robbing or killing for her few possessions.

What I found very interesting was to compare the places Ida visits with what they are like now. For instance, she often mentions the number of inhabitants of towns and cities. Some of those we know today as megacities were little more than small towns back then. Many of the monuments and sights she describes are still there, while others have long gone. The political landscape has, of course, changed significantly since Ida's days, but the cultural make-up of some societies has not advanced all that much, I'm afraid.

The book made for very interesting reading and, once more, made me glad to be alive today and in this part of the world.
Posted by Librarian at 07:31