"The Wedding Girl" was part of the pile of paperbacks my mother-in-law gave me during last year's Yorkshire Holiday - I'm still not through with it, there were so many! 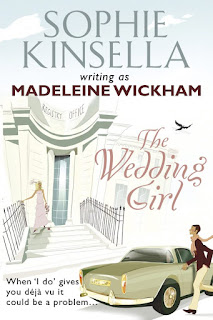 This was not the first book by Sophie Kinsella I have read. If you are interested, you'll find several more reviews of her books on my blog; simply type "Kinsella" in the search bar on the top left corner of the page.

Some of her books I found too shallow even for my liking (and not at all "hilarious", in spite of what the quips on the back may say), but there have been one or two I found surprisingly good - deeper than expected, funnier than expected, better than expected.
One thing is for sure: The slack editing (if any at all) I complain about so often with free ebooks does not happen with Kinsella's work. She is of course successful enough for her publisher to pay skilled proof-readers and editors - a definite plus for my reading experience.

Right, back to "The Wedding Girl":

An 18-year-old girl befriends a gay couple and marries one of them to enable him (an American) to remain in the country. The three friends lose touch with each other, and when the young woman gets engaged 10 years later, she never thinks her first "marriage" (which of course was never a proper marriage at all - only on paper) could jeopardize her future happiness.

Well, past secrets have a way of turning up when they are last needed, and this is exactly what happens to Milly. The repercussions are felt not only throughout her family and that of her fiancé. More secrets (not Milly's) come to light, and it is clear that nothing will be exactly as it was before.

A few people turn out to be not quite as nice - or as nasty - as they first appeared, and maybe it is that what I liked about this book: None of the characters is painted in just black or white, but (to a certain extent) I can sympathize with most of them.

Religiousness and some people's view of homosexuality is as much a topic as the way some try to be what others expect of them, instead of being themselves. Love between friends, lovers and family members can conquer a lot - but can it conquer everything?

As I said, I enjoyed this book more than I thought I would. I did not have a  character I cared about particularly (this seems to be the case for me with all of Kinsella's books), and I did not even like Milly, but I was interested enough to want to know what was going to happen next. There was more than one surprising moment, and by no means "all's well that ends well" - there is no "happily ever after" for everyone, just like in real life.
Posted by Librarian at 07:43