My Mum and I have long been fans of the Agatha Raisin mysteries by M.C. Beaton, and so we were very pleased to discover that this year not just one, but TWO new books in the series have been published: #26 and 27. 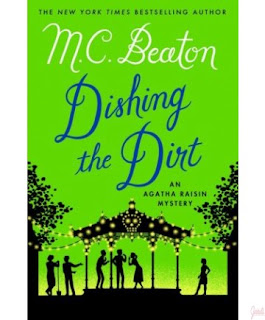 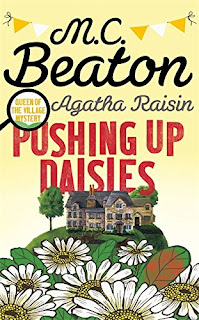 I am reviewing both of them in one post, not just because I read them one right after the other, but also because I think they are so connected that they could/should really have been one single volume.

So far, every book in the series could be read as a stand-alone. Not so this time, in my opinion. While the actual case is solved in "Dishing the Dirt", it ends in a way that is clearly not "the end". The second story, "Pushing Up Daisies", picks up many threads started in the first one, and leads to a more satisfying wrap-up.

It had been a long time since I last read an Agatha Raisin, and it took me a while to get used to M.C. Beaton's storytelling pace and unfrilly style. By the time I was ready to start on "Pushing Up Daisies", I was fully immersed in Agatha's world again.
What I'd not noticed in any of the books before was a definite lack of editing in "Dishing the Dirt". Not only were there several typos, there were also mistakes of a different kind. For instance, the character of a young man is said to be 26 years old. One page on, he is suddenly 25. Another character is introduced to the reader as Sadie, but that is the only time she carries that name. All further appearances of her go by the name Sarah.
Was there too much pressure on the editor(s) to get book #26 into print in time, before the next one was due? There are no such blunders in #27.

In both stories, we meet Agatha true to her old form: thinking about quitting smoking but never really doing it, wondering about her relationship with Charles Fraith, dealing with the frustration of dead ends and red herrings in her murder investigation, and coming across a set of characters often turning out to be somewhat different from what she first thought (men including).
Of course, as in all her stories, she has a romantic interest. Also, her former employee Roy Silver makes brief appearances. Her good friend Mrs. Bloxby surprises for the first time.

Altogether, I enjoyed meeting Agatha and the other regulars again very much - there was slight disappointment with the first book, but as a fan, I'll take the bad (or less good) with the good, and thank my Mum for having ordered them both for us.
Posted by Librarian at 19:09