When I did my Christmas baking such as cookies, ginger bread and so on, I realized that I use several utensils from the past, inherited from my mother or even grandmother.
I won't do without them, and I would not like to exchange them for modern household objects, because I am used to them. I confess it is also a bit out of nostalgy and for sentimental reasons. Most of these items I already used when I was a little girl and helped mum baking. 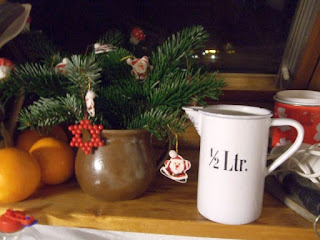 This enamel measuring jug is used really every day, very often, to pour water for a sauce, or measure for tea, measure milk for baking, to refill the water tank of my (modern!) coffee machine. 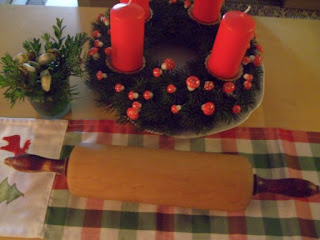 This wooden rolling pin is very old, I suppose, from my grandmother, because I didn' see it at my mother's, she had a more modern one. But I love it, it works the dough so fine. 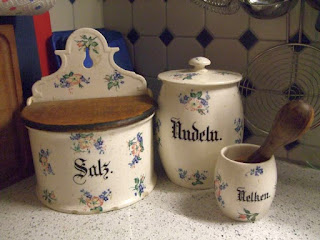 And this set is from an aunt of my husband, when she died we got it, nobody else wanted it. Of course I do not preserve noodles in it ("Nudeln" means noodles), but the tablets for the dishwasher. In the "Salz" container there really is salt, and because of the wooden lid, it never gets damp. "Nelken" means cloves, but I put this wooden lemon juicer from the French Provence in it. My cloves are kept in a glass with screw lid. 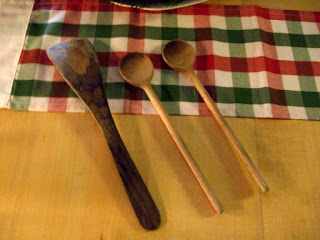 Also my wooden spoons are old, but great for pots and pans with teflon or similar coating. 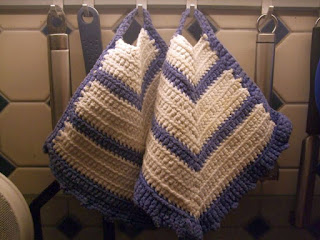 The potholders are hand-crocheted by an old lady, pure cotton, very thick. This lady never in her life did any crafting, she was very rich and even when she had to sew on a button, she had somebody for doing it. The more I appreciate it that when she was old and sick, she made these potholders for me. I think she practiced a long time until they became as pretty as they are. I do love them. 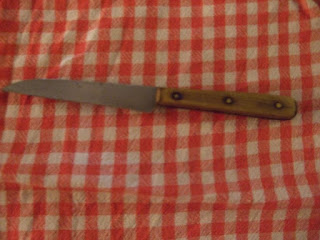 And last but not least I want to show you my husband's very favorite little knife. He got it when his mother died (rather young) in the 1970s, and it was already old and used back then. In the meantime the blade has become very thin from being sharpened so often, but it is "sacred" to him, he says he cannot make a good potato salad without it.
[I was allowed to post my Dad's recipe for spuds salad on my blog in 2012 - you can find it here, if you like.]
- - - - -
Of course I have known these utensils from my parents' kitchen all my life, and knew some - but not all - the stories behind them. I myself use many things from the past every day, for instance my everyday plates (I don't have any others) are cream porcelain with a gold rim - they were my grandparents' "for best", bought when they married in 1935.

Much as I like shiny new stuff, I really am attached to things that have been in the family for a long time, and do not get rid of them just because they are old, if otherwise they are still good for use.
Posted by Librarian at 08:07