Those of you who were already around my tiny part of the blogosphere last year may remember that I posted pictures of New Year's Eve in Ripon and an interview with George Pickles, the former Hornblower.

During the course of this year, we have regularly been in touch via email, and when my sister and I were in Ripon in the summer for our annual Yorkshire holiday, we met up with George and Lilian.
Since then, more emails have been going back and forth, as have been Christmas cards.

In his last email before Christmas, George sent me this picture of what Ripon's market square looks like these days. Let me use it to wish all of you Merry Christmas! 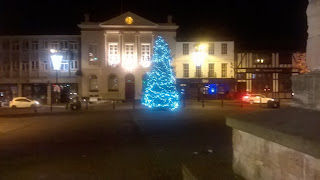 Not only because of the "guest" picture have I labeled this post a guest post. I also want to share a story George told me from his Hornblower days:

Me and Hugh Ripley
as told by George Pickles, former Honblower of Ripon

Legend has it that the ghost of Hugh Ripley, who was the last Wakeman and first Mayor of Ripon. frequents the Wakeman's House which overlooks the obelisk on the square where the Setting of the Watch takes place. It is said that if the horn is not blown to his satisfaction, his ghostly face will appear in the attic window and a pestilence will descend upon the City. 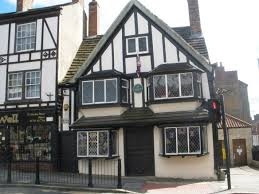 On January 2nd 2011 I was on holiday, in fact on a cruise. At that time I had no regular deputy support and I had left my duties in the hands of a novice deputy, thinking all would be well as it is a very quiet time of the years for visitors.
I caught the news on the ship's TV about an earthquake in Ripon, which had happened at 2 minutes past 9 pm, while we were in the Atlantic. When we reached land I phoned the deputy on the land line knowing there could be a link, judging by the time of the event.
He told me that it was a very cold and frosty night, and as he was not very proficient at blowing the horn anyway, the frost making it hard to breathe and his lips stick to the mouth piece of the horn made it worse. He said the first three notes were just about passable, but the last note was little more than a squeak!
No sooner had he blown this excuse for a blast of the horn, he said he was sure Hugh Ripley's face appeared in the attic window, and then all the city shook!!!
This was kept between me and the deputy for quite a while before I started relating what had happened. It is agreed by us both that the deputy will remain anonymous.
You can see from the picture that the ghost has always a good view of what goes on at 9 pm. 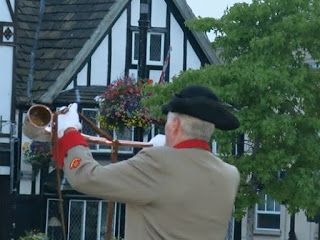 For the coming days, I will be travelling back and forth between my and O.K.'s place a few times, with little or no occasion to comment on your blogs or post. But you can be sure I shall read your posts as well as the comments you so kindly leave on my blog. Full service will be resumed after the holidays :-) 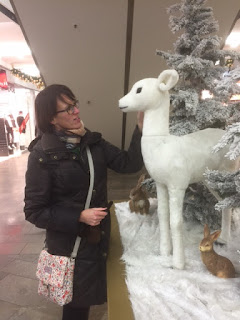 Until then, I'll say good-bye for now, and once again best wishes for the holidays, with this picture showing me and a new friend I've made Thursday night at the shopping mall.
Posted by Librarian at 16:31