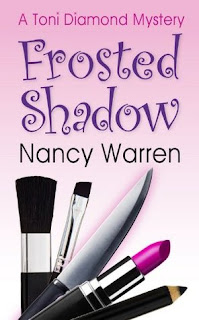 Somehow Toni feels responsible, and gets involved with the investigation - and the Detective assigned to the case.

Soon, suspects and clues appear, and as the amateur and the proper detective work together, not only do they find the killer, but also each other.Before the happy ending, one more person loses their life, and of course this would not be a mystery if the heroine herself was not in danger at some point.

I liked this book, after my initial negative reaction to the heroine: Toni is everything I am not: single mother, hard-working sales woman and firm believer in cosmetic products to make the world a better place.
But there is more to her than meets the eye, and as I read on and noticed that she did indeed have a rather bright head on her shoulders and a good heart, I found myself warming to her and her crazy mother (think an elderly Dolly Parton living in a neat trailer so full of bling you need sun glasses).

The business organisation, the conference and its participants and other characters were well described, and the pace of the story was neither too rushed nor too slow.There was some humour in the book, but also (every now and then) food for thought.

I would not mind reading Toni's next adventures; this was #1 in a series, and I found it as a free ebook on Amazon's kindle shop. 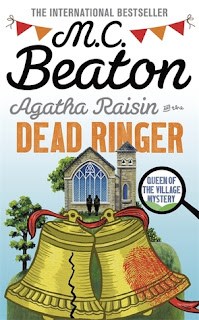 # 26: Agatha Raisin and the Dead Ringer


My Mum and I love the Agatha Raisin series, and so I was very much looking forward to the next-to-latest instalment.
However, I must admit I was somewhat disappointed with this one.

Up until the first third or so, everything is pretty much as you'd expect: A typical aspect of village life is taken as the background (this time it is bell ringing). A cast of more or less quirky characters are introduced (the bell ringers, the vicar and his wife, plus an extremely handsome bishop and his dean). Agatha is her usual self: smoking, drinking G&Ts, worrying about her waistline and pining for the one true love that will turn her life around.

The first murder occurs among the bell ringers, and Agatha is drawn in to help investigating.

Then the book changes - and not for the better, I'm afraid.
While there is still much of what we like about the series (the relationships between Agatha, Charles, her ex-husband James plus some other well-loved regulars), Agatha has an uncharacteristical hard time at solving the mystery. In fact, for a long time, she does not feel like doing any detecting and seriously considers giving it up altogether, without finding out who the murderer is, and how (or if) it is all connected with the disappearance of the bishop's fiancée years ago.

This and several other things happening in the book make it a bit of a jerky read.
I missed the flow and the dramatic build-up. This was just not entirely "our" Agatha.
Still, it is part of the series, and if you follow any kind of series, be it on TV or books, you know what I mean - you can't dismiss one part, you want the whole thing.

There is the latest book waiting for me on the shelf. Something tells me (the voice of hope, maybe) that one will be better. 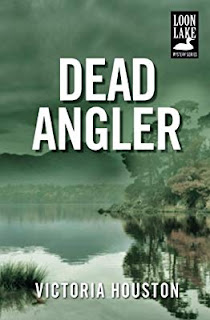 Another freebie from Amazon's kindle shop, another first of a series, and another mystery - but set in an entirely different enviroment, one I know next to nothing about: fly fishing!

A retired dentist, widower and recovered alcoholic, has no greater joy in life than fishing. He also sees his old friends almost daily for breakfast and has a quirky neighbour who is very knowlegdeable about wildlife and the outdoors. Then there are his two grown-up daughters, very different from each other both in what they have been making of their lives and the relationship with their Dad. Oh, and don't forget the Police Chief of the small town - a no-nonsense woman, younger than the doctor, but not too young; the reader soon learns of the doctor's interest in her.

One night, she takes him along the river for some fly fishing, when he stumbles in the water and finds the dead body of a woman who turns out to have been an old friend of one of his daughters, just recently returned to her hometown.

The police chief quickly enlists the doctor's help, and with his access to family and friends of the murdered woman, they eventually manage to find out who killed her, and why.

The outcome was not as easy to guess as it may sound; several suspects had reasons for wanting to see the woman dead.It was a good read, also because of the (for me) exotic setting of a small backwater town (the whole area really exists; you can find out more ont he author's website, see below.).
Fishing techniques and descriptions were a bit overdone to my taste, since only part of it was relevant for the story, but I suppose it added credibility.

I cared for the main characters and liked them and would like to read more of Dr. Osborne and Police Chief Lew.

The author's website is here.
Posted by Librarian at 08:15