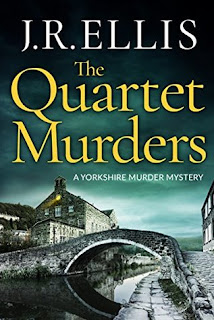 The 25th book I have read this year was the first of this series, and since I had enjoyed it, I was looking forward to the next book. I was not disappointed, and was drawn into the story right from the first sentence. The book starts on a Friday night in late November, and guess when I started reading it: on the last Friday in November, when I was on my way to OK for the weekend.

A famous violinist is shot dead at the end of a concert in Halifax, right in front of the audience - among them Inspector Oldroyd, who has driven over from Harrogate for the evening.

Because he has been there when it happened, he helps with the investigation in spite of it not being in his policing district. Like in a locked room mystery, it seems impossible that the killer has gotten away, but apart from the murder weapon being found on the premises, he or she seems to have vanished without a trace.

The violin played by the victim has also disappeared in the immediate tumultous aftermath, and since it was a world famous Stradivari and worth millions, the reason for the deadly shot seems to be clear.

But nothing about this case is as straight forward as the investigating team would like it to be. On top of the obvious, the case has personal and political implications, and the number of suspects grows. The more the team learn, the deeper the clues point towards the past.

Oldroyd‘s personal life is also not without complications, leaving plenty of room for further development in the following books of the series.

Just like with the first one, I enjoyed this mystery. I did guess the general direction of the underlying reason behind the first murder (yes, another man loses his life before the investigation is successful), but it was never boring, superficial or too easy to guess. Most of what happens and how the characters act is credible enough, too - apart from a scene towards the end, involving a cat.

I won‘t say more because one or two of you might want to read the book, too. For me, the next one is already waiting!