At about 18 km, the longest walk or hike we went on during this year's May holiday was a lot shorter than the 30+-kilometer walk of last year. It took us to a place I first visited in June 2016, a few months after O.K. and I got to know each other. You can read about it here. It was also our first hike in 2020, and I could have sworn we've been back once more since then, but there was no entry about it in my diary and nothing on my blog, so I must have dreamt it!

Anyway, there we were on Wednesday, the 12th of May, starting from the same parking space O.K. likes to use for this particular walk.

The weather was no surprise and no different from what most of the previous few weeks had been like, a fast-changing mix of clouds and sunrays, with the odd shower to be expected (but not reaching us this time).

Even if it is not very steep, the long uphill stretch (5.5 km) from the parking lot to the tower (Moosturm) had me wanting a rest before climbing the steep spiral staircase inside the tower. 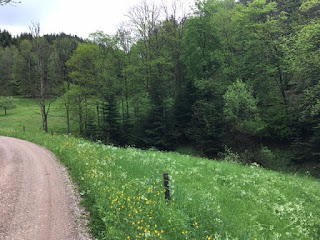 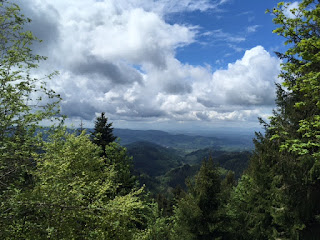 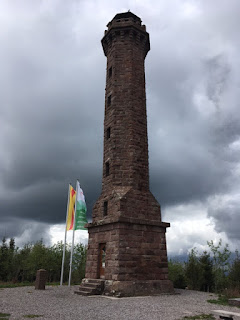 As it was a weekday, we met few other people along the way, and there was nobody around the tower when we arrived on top of the hill, giving us free choice of where we wanted to unpack our sandwiches. We chose the shelter you can see to the left in this top-down view from the tower. 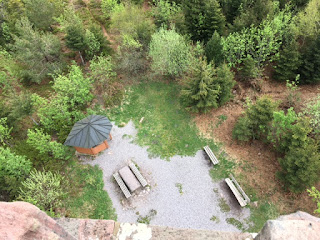 The clouds made for some interesting shadow-and-light effects on the landscape around us. As before, my mobile phone thought we were in France and sent me a message "Welcome to France", when in fact it is about 25 km from there to the border.

Our next stop was the monument for storm Lothar. It is always a popular spot for cyclists and walkers, and today was no exception with a few small groups and single hikers there. 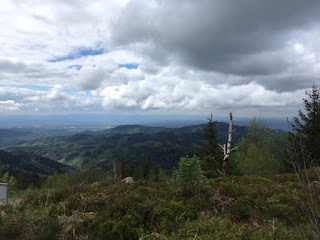 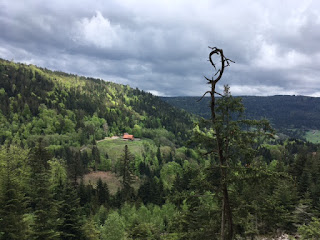 We decided on a different route back to the car, walking past a place with a shelter called Hilseneck (sometimes spelled Hylseneck) and the Kornebene, a guest house run by the Friends of Nature, a Germany-wide association. Of course, like all other places, both houses were shut. It felt strange walking around them, the atmosphere was a mix of feeling abandoned and anticipating their re-opening.

The "Ebener Weg", literally "flat (or even) path", was really that - very comfortable to walk, but seemingly never ending. Every time we expected to find the Kornebene around the next bend, another stretch followed - I didn't mind the length, but admittedly, it was still nice to get back to the car eventually. 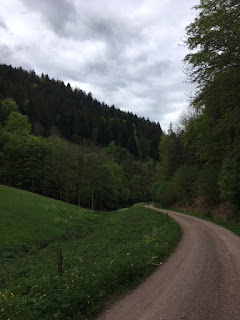 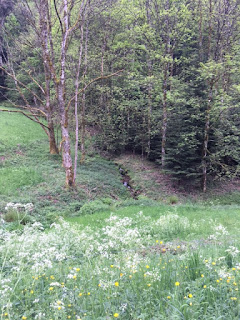 After coffee and a brief rest at home, we paid a quick visit to a friend to hand over his birthday present. For our evening meal, we had delicious pasta with arrabiata sauce and pesto, both very nice. There was only one day left to our holiday together, as O.K. was working on Friday and I was going home that day.