My first week back at work after the enforced break of six weeks went by in a whirlwind, and much smoother and more relaxed than expected. This was partly due to many of my clients/customers being on holiday right now, which generally slows the pace down a little every summer. Part of it was also because I made sure to take enough breaks for my eyes - if I do not send myself away from the computer screen, nobody else will!

But before that week started, there was the weekend. It was cut short by a few hours because O.K. had to leave mid-afternoon on the Sunday instead of the evening, as the village band were to play on the square in front of the village hall to mark the election of a new mayor.

Both Saturday and Sunday were rather unsettled, with the weather frequently changing between sun and rain, plus some thunder thrown in for good measure. We still managed to get a run in on Saturday morning (the first in I don't know how many weeks!) and a walk in the afternoon, again at the palace grounds. 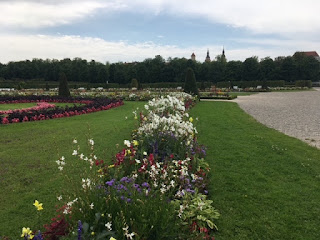 The Orangery (greenhouse) usually shows one or two exhibitions every summer. Right now, it presents all sorts of waterlilies and other water plants. Did you know that in German, waterlilies are called Seerosen - literally "lake roses"? Admittedly, they do not really look like roses, but I like the name nonetheless. Here are a few impressions of that exhibition: 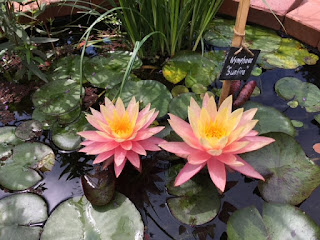 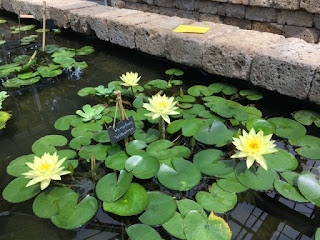 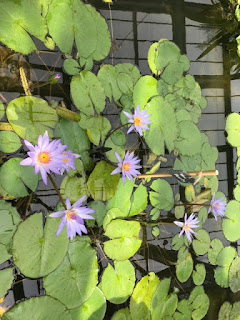 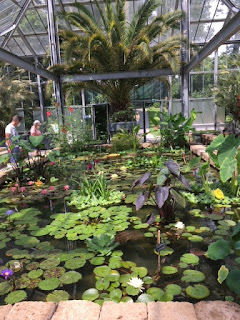 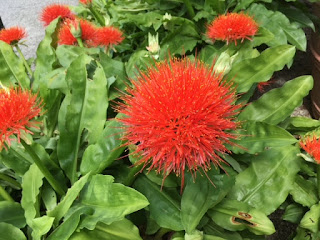 After O.K. had left on the Sunday, I spent the evening quietly, mentally getting ready for the following day.

That Monday went, as I said, smoother and much better than I had expected. A mix of sun and rain made for a beautiful double rainbow in the evening, as seen from my kitchen window: 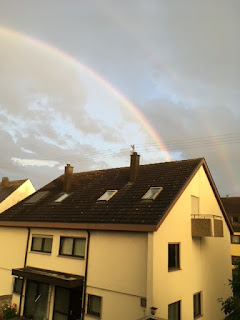 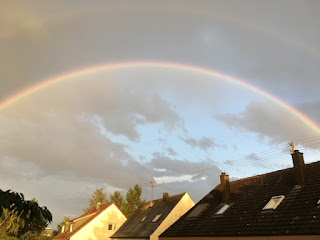 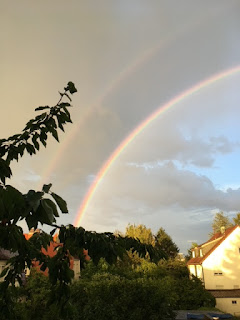 On Wednesday afternoon, RJ (my boss and employer) came visiting - we had not met in person for about a year! There were a few work-related things I wanted to discuss, which of course we could have done over the phone and/or computer, but the main reason for his visit was the large screen he brought for my desk. Of course, that screen would have been very welcome all of last year, and would have made work a lot easier for my eyes, but never mind - now it is set up and connected to the small notebook you can see to the right. It belongs to my biggest client, and I spend most of my work day at it. The laptop on the left is the one I use for all my other work. 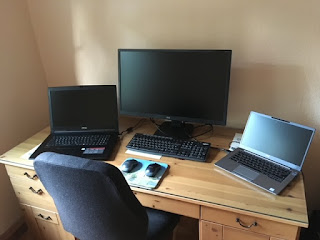 Thursday was the most beautiful day in a long time - completely dry, just sunny and warm, not hot. I went for a lunch time walk with a friend I had not seen in about 8 weeks, and it was very good to catch up with her.

After work, I went for a good walk on my own, two 1/2 hours straight. I took these pictures, of the fields and orchards looking as if it were already mid-August instead of the end of July. 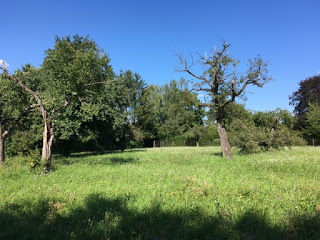 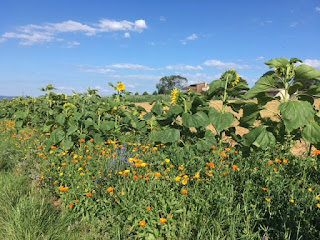 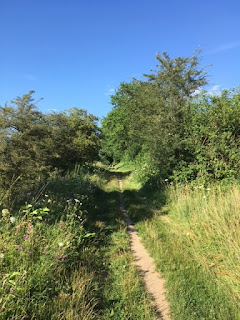 One last picture for this post, taken on the 31st of July near O.K.'s village. There are many fields of sunflowers in the area, but this one I particularly liked with its half-abandoned look. 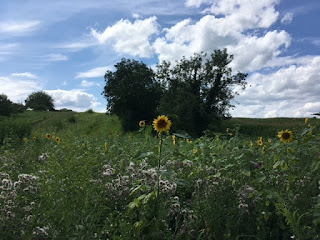 Now I am on the 2nd day of the 2nd week back, with a check-up scheduled with my eye doctor this morning. It is now three weeks since the 2nd operation, and I am doing very well with my provisorial specs.

Right, time to get some breakfast and catch that train to Stuttgart!