The first full day of our Odenwald break was Saturday, Sept. 17. The weather forecast was not brilliant, but after a leisurely and delicious breakfast, it looked good enough for us to attempt a first venture into the woods right behind the hotel.

We had appointments for pedicure and massages in the early afternoon and so did not plan on staying out very long, but we managed to see quite a lot on that first walk, including what became my favourite view of the whole area.

A signpost "Prinzenstein" (prince's stone) caught our attention almost as soon as we entered the woods, and of course we followed that path, arriving at this monument a few minutes later: 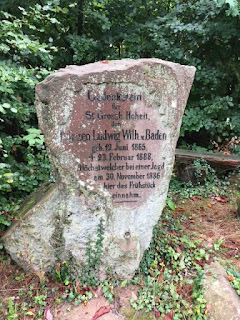 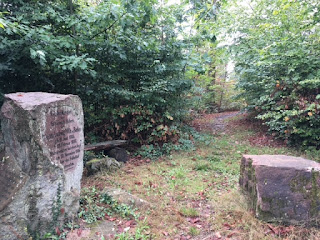 It was erected in memory of Prince Ludwig Wilhelm von Baden, who according to the stone once took breakfast here during a hunt. It amused me to see a memorial for someone's breakfast, but I noted that the prince made it not even to his 23rd birthday. Reading up on him on wikipedia, I found that the official cause of death was given as pneumonia at the time, but there were other reports that he really died in or after duelling. In any case, he did not seem to have left a lasting legacy (apart from the "breakfast stone"), but I found the photo of him with his siblings and brother-in-law somehow touching.

Our next stop was a 400+ year old oak tree - grown high rather than broad, in fact so high that it was impossible to get the entire tree in one picture. It is a beautiful tree on a small, quiet clearing: 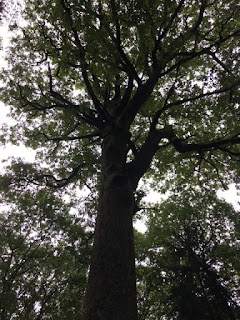 On we walked through the woods that looked much greener than expected, obviously refreshed from the recent rain falls we'd had: 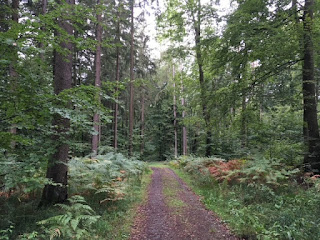 We had no particular plan to go anywhere specific, but followed sign posts to "Reihersee" (heron lake): 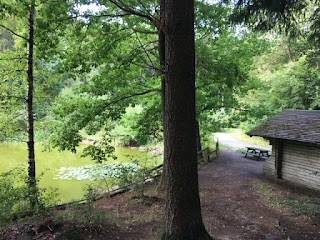 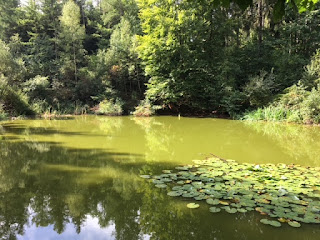 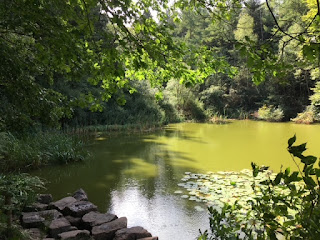 This small lake was specifically created in 1971 to provide a local colony of herons with food and shelter. It has since evolved into a refuge for many kinds of birds (even kingfishers!), insects and plants struggling for habitat elsewhere, and it is protected - no fishing, swimming or dog bathing is allowed here.

The place was so quiet, it felt as if it was under a spell, especially when the sun broke through the clouds and gave it all a golden shine.

We walked further on and suddenly found ourselves at this wonderful view of the Neckar valley, with the river Neckar far below: 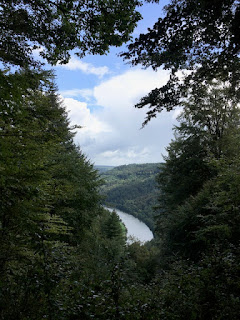 In the course of our stay here, we passed this spot (aptly called "Neckarblick", Neckar view) several times, and I really loved it no matter the weather.

It was time to return to the hotel for our appointments. We spent the rest of the afternoon in the hotel's own spa before getting dressed for dinner, which was as delicious as the evening before.