Rapunzelturm by Mark Stichler is a crime mystery set in my hometown, Ludwigsburg - and that was the only reason for me reading this book, and sticking with it until the end. 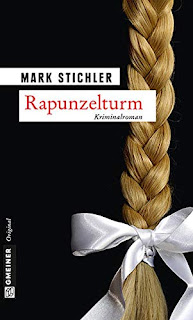 A murdered woman is found hanging from Rapunzel's braid in the fairytale garden within the palace grounds. When the two young detectives begin to question witnesses, some of them quickly turn into suspects. But the most obvious is not always the truth, is it, and the couple need to cope with two more deaths - one of them similarly staged in the fairytale garden again - before they solve the crimes.

There is also a lot going on in their private lives, and at the same time Ludwigsburg's famous palace grounds and fairytale garden is under threat by plans of a big makeover, not appreciated by the majority of citizen but welcome by the municipal council because it means money coming in.

And what do the two ex GIs living in Ludwigsburg's former US military housing area of Pattonville have to do with it all?

The story had potential but didn't live up to it for me, I'm afraid. Much of that was due to the rather wooden dialogues between the protagonists, and the entire style of writing seemed more like something a hobby writer would produce than coming from an author who has been working as a journalist for many years.

Mark Stichler was born the same year as I, and with him writing a book set in my town, maybe I expected too much but was disappointed.

Back in 2018, I had read another book set in the fairytale garden, and enjoyed that one very much. You can find my review here. You can see a picture of the real Rapunzelturm in this post.