We were ready - weather-wise and equipped with a map - for our first proper hike here on Monday, the 19th of September. The grey clouds did not worry us, and several times the sun even managed to get through (sort of).

Leaving the hotel and changing into our hiking boots in the car park (we kept the crate with our boots in the trunk of O.K.'s car most of the time), we soon made it deeper into the woods. 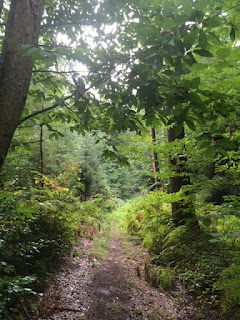 Our circuit took us across a field, and the wide open space was a nice contrast before we were back under the canopy of the trees. 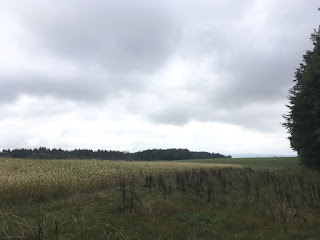 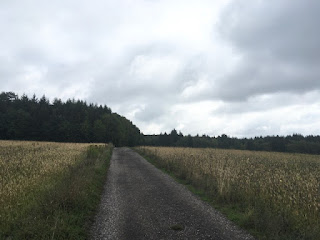 The Minneburg, a ruined castle overlooking the river Neckar, was our goal, and we reached the site without meeting more than a handful of other people. 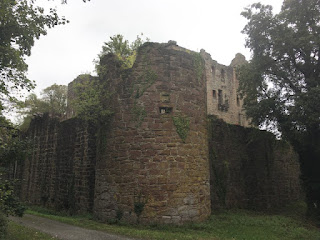 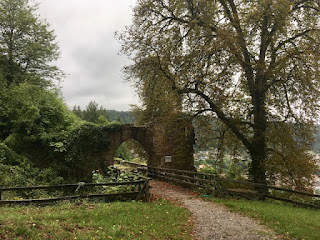 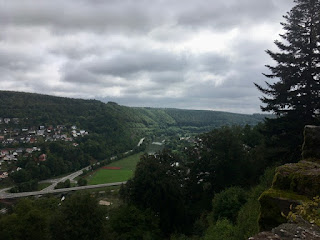 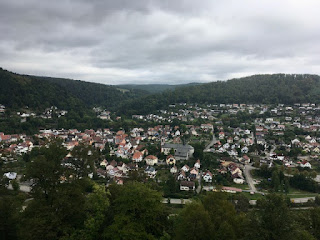 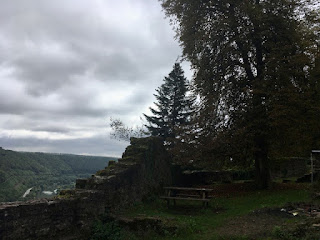 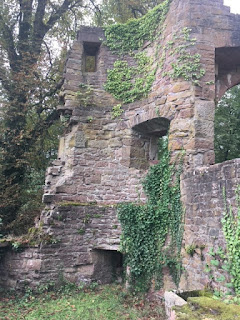 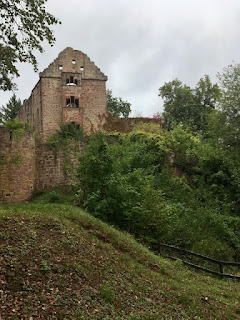 As the walls are not as stable as they look, the inner area of the ruins is closed to the public. But the outer courtyard is open and provides great views of both the ruins and the Neckar valley, with the small town of Neckargerach at the bottom.

The way back took us through a settlement of a few houses around a farm, with this small chapel ("Hubertuskapelle") at its entrance. It was locked, quite unusual for such places. The rowan tree and the well were on the other side of the road just a bit further on. 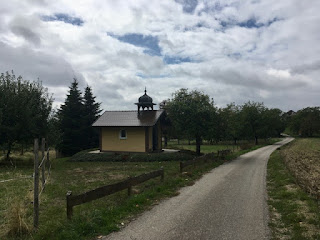 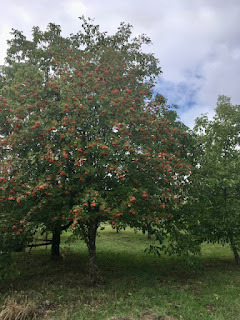 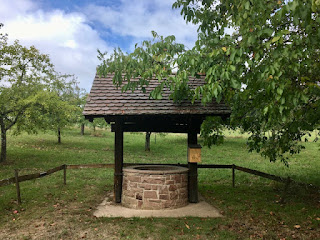 About 13.5 km and less than 3 hours later, we were back at the hotel in time for coffee before going to the spa, which we had entirely to ourselves that afternoon. Most other hotel guests had either left after the weekend or were sitting in a seminar - good for us!

We took our habitual two turns in the sauna, resting for a while afterwards before going back upstairs to our room and dress for dinner. If you detect a pattern there, you are right; it is exactly what we want and look forward to during our May and September holidays.

A few facts about the castle (Minneburg):

Although its origins are much older, the castle was first mentioned in official documents in the year 1339. Like most castles in this part of the world, it changed hands several times and suffered damage in various conflicts, worst of all during the Thirty Years' War.

The partly destroyed castle was given up on March 22 in 1622 (I noted that date because my birthday is March 22) and then used as a source for building material by the locals.

About 200 years later, in the early 19th century, a hermit lived in the ruins, making a small income by crafting wooden clockworks. At the end of the 19th century, attempts were made at securing what was left of the castle, but this happened on a professional scale only from 1970 onwards.

Legend has it that the name Minneburg comes from a noble lady, Minna von Horneck. She was forced to marry a man she did not want and fled into the woods, hiding in a cave near the site where the castle was later erected. She loved a knight who was away on a crusade, and desperately waited for him. But by the time he returned she was very ill, and on her deathbed, her beloved promised to erect a castle in her memory.

The wikipedia entry about the castle (only in German) shows many good pictures I was not able to take, since we could not go in but had to admire the ruins from outside.