Arriving at the car park after our bit of exploring in the village of Waldkatzenbach, we were not desperate to go directly back to the hotel, and since we were already using the car, we took advantage of that. O.K. drove us into the small town of Neckargerach and up the hill on the opposite side of the river valley. From there, we had a good view of the Minneburg, the ruined castle we had walked to the day before. 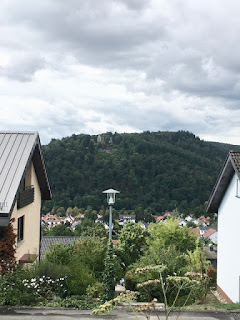 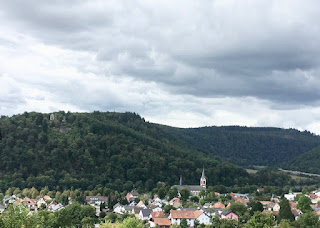 Imagine to live in one of the houses on the slope and enjoy that view every day!

It was time for coffee, which we took at the hotel as usual. One of the cats we'd seen around was in the hotel grounds, but did not seem comfortable with me getting closer, and so I just left him or her in peace. 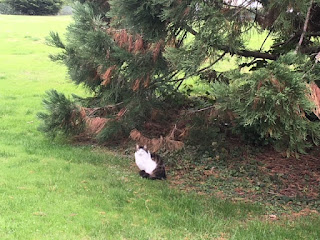 It was still relatively early, and the weather looked good enough to fit in another walk - the roughly 5 km or so we had covered during our Katzenbuckel walk were hardly enough to make the day feel "full" in terms of walking.

The hotel had provided us with a few suggestions of tours starting directly from there, and this time we chose a short one on the other side of Neunkirchen where we had not yet walked.

Part of the circuit was in the woods, but the path also crossed fields and orchards which were beautiful on that early autumn afternoon, even though I did not take any pictures. 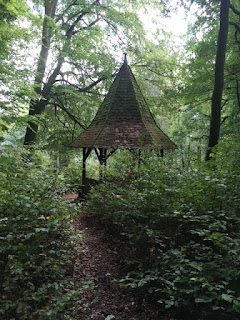 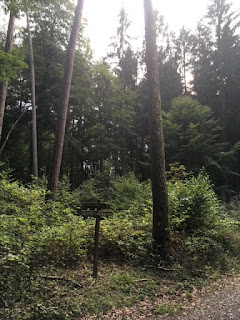 We came across this small pavilion, looking like something out of a fairytale. A stone well nearby was trickling down the hill; I am sure if one drinks of the water, something magical happens, but we didn't try it :-)

By now we had about 11 km under our belts and were ready to head back. The rest of the afternoon we spent in the spa, as usual ending the day with a delicious meal.