Last of November, First of December

The last three days of November were here, starting with Monday, the 28th. It was a good day for desk work, which I did all day, and not ideal for walking. Nonetheless I went out after work; the soft drizzle wasn't too bad but I decided against the muddy fields and instead visited parts of town where I had not been in a while.

The rain continued into Tuesday (Nov. 29), but I reached my work place for the day largely dry. People at the German Literature Archive in Marbach always make me feel welcome, and we had a productive and pleasant meeting.

By late afternoon, it stopped raining, and so my Mum, my sister and I met up to visit the Christmas market together. I was so happy when my sister suggested that, and all three of us enjoyed it. We started early enough for it not to be too packed yet, and when the crowds really descended on the market, we went home. 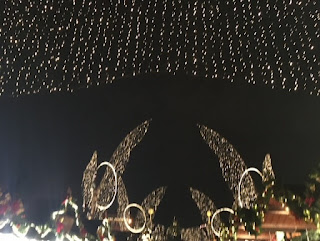 I had to be up early on Wednesday, the 30th, for an appointment at the breast cancer screening centre. They invite me for a mammography every two years, and I duly go. In the past, I have had false alarms, and I am not scared or anything, but better safe than sorry, right? The result should arrive by letter some time this week.

Sunset was going to be at around 4:30 pm with full darkness around 5:00 pm, so I had to go early if I wanted to walk in daylight, putting in maybe another hour or two of work afterwards. I did that, and in spite of the day being entirely grey, it was good. 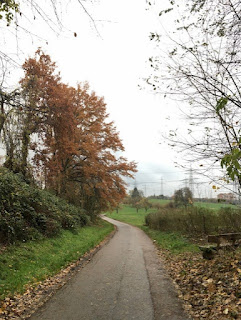 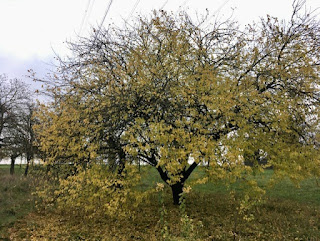 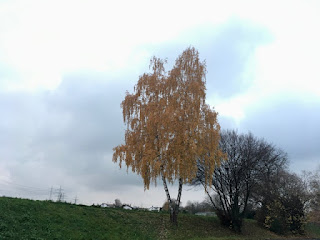 Thursday, the 1st of December, was here: I had not just one, but FOUR Advent calendars to open! (All of them with chocolate...)

Work was on-site at my client's today, but they are saving on energy bills and the office building is not heated properly. I knew that and dressed warmly, but no matter how warm you dress, when you sit most of the day and only your fingers move at the keyboard, the chill creeps into you anyway. They have also set the taps for the toilet sinks on cold water only - I HATE having cold hands to begin with and then having to wash them in cold water! Next, I was looking forward to a hot lunch at their canteen, which is usually really good. To my disappointment, my food was only luke warm... at a restaurant, I would have sent it back, but in this situation, I ate quickly to get at least a remainder of warmth. Still, all things considered, it was a good day, but I am considering NOT working on site there this week.

Friday, the 2nd of December: The much awaited Schrottwichteln ("Secret Rubbish Santa") with my girl friends was taking place at my home, as per our tradition. Several times, I have posted about this event on my blog; as a group of friends, we have been doing this for at least 20 years. We started out alternating between our respective places, but ever since my husband died, I have been the host, and it is always a cheerful evening. That does not mean that we do not talk about serious or sad things - we do -, but mostly, that night is a happy one.

There were only four of us at my flat, with our friend from Northern Germany joining us by video link. 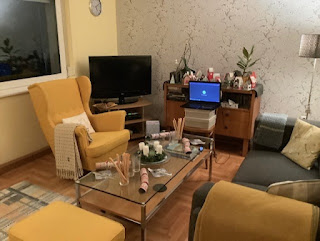 The next morning, Saturday (Dec. 3), I got up early again. My trains to Offenburg were on time; I arrived at O.K.'s cottage at lunch time for a quick snack before we set off: The next two hours, we went from door to door in the part of the village assigned to us, selling tickets for the village band's annual concert.

For the past two years, the concert could not take place, but now we were back, and it felt as if we'd only been round people's doors last year, not three years ago. We sold many tickets and had a few nice conversations, but I was more than ready to go home and spend the rest of the afternoon and the evening in the warm cottage, doing a few household jobs while O.K. had to go out again - so close to the concert, there are extra rehearsals scheduled for the band, not just the one band practice on Wednesday evenings.

On the 2nd Advent Sunday, the 4th of December, we only went for a quick walk around the village in the early afternoon; the rain increased in intensity, and by the time it was dark, the sound on the cottage's roof windows made one glad to be indoors. After coffee and cake, we put up a few bits of decoration; while O.K. put in another hour or so of trumpet practice, I read blogs and played on my ipad. We finished the week with a delicious meal of cheese, bread and wine, followed by a movie on TV.