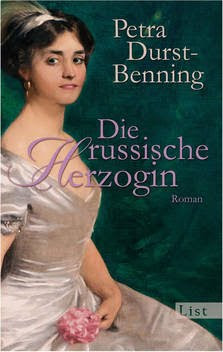 "The Russian Duchess", as the title would read in English, is the sequel to "The Tsar's Daughter" ("Die Zarentochter"), which was my first read in 2011 and for which I have posted a review here.
This book picks up some time after the first one ends.
Olga and Karl have established themselves firmly in Stuttgart and in the hearts of the people as future Queen and King of Württemberg. Olga is particularly popular for her good works; she is on an endless round of looking after various charity institutions and fund raising parties, while Karl keeps more to himself, deeply disappointed for being deliberately shielded from all current affairs and politics while his father, King Wilhelm, is alive.

The couple remain childless, and when Olga's brother Sascha back in St. Petersburg finds the family can not handle one of their daughters, nine-year-old Wera, for her difficult temper any longer, and doctors advise them to put the girl into an institution for the insane, it is decided that Wera is sent to Stuttgart to live with her godmother Olga.

At first, Olga is thrilled by the prospect of having a little girl of her own, but she soon finds out that Wera is indeed different - she is an aggressive, sometimes violent child, can not sit still long enough to enjoy a peaceful meal and generally spells trouble from Day One.
Only after some quite dramatic events Olga manages to get through to Wera, and their home live takes a turn for the better.

Her marriage to Karl is going through a rocky patch, but when old King Wilhelm dies and Karl becomes King of Württemberg, he and Olga tackle their new tasks with zeal and remain popular with the people.

As Wera grows up and makes friends and falls in love, Olga finds affirmation and consolation mostly in her charity work. She also renews an old friendship which means a lot to her.

The book ends with an epilogue set in 1909, when Olga and Karl are long gone and Wera starts making one of her own ideas come true, founding a home for single mothers with their children.

It is an overall pleasant read, but were it not for the local connection to my home region, I would not have been interested in this historic novel.
I appreciate the vast amount of research the author must have put in, while her style is neither very elegant nor very consistent. Some bits seem to have been put together at different times; there is a lack of "flow" and several scenes appear not to have been thought through very well.
Still, as I said, a pleasant read.
I wonder why it was decided to use a painting for the cover which has nothing at all to do with the real people in the book, while for the first book, a painting that really shows Olga was used.
Here is what Wera looked like as a child with Olga and Karl: 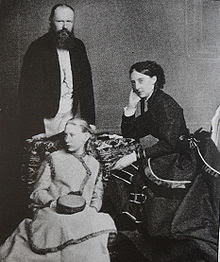 And this is Wera with her husband Eugen, who died at only 30 years under mysterious circumstances (some sources claim he died after a duel, and because duelling was forbidden by then, the real cause of death was hushed up and the official documents state a sudden illness). 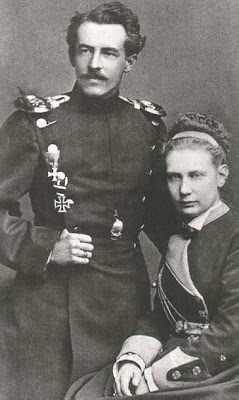