Yes, I am still in my "Roman" phase, and after my fourth read of this year was Poseidon's Gold from the same series and a short stint with a Russian Duchess in between, I was back in Imperial Rome, accompanying Marcus Didius Falco on his seventh adventure. 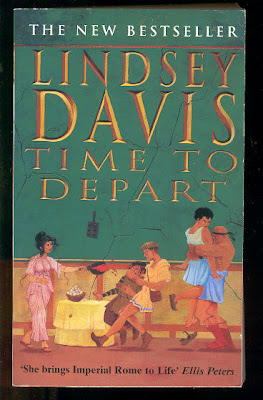 Soon after I'd started, I realized I had read this book before, but it was so long ago I did not remember every detail and, most importantly, how the puzzle is solved and the book ends. Therefore, I decided to stay with it, and although it took me a long time to finish it, I enjoyed it.

It is a good and easy read, but these days I am so often out with friends or have visitors at home that I simply do not get to read as much as before, even going to sleep some nights without having read a single page - something that never used to happen until about a year ago.

The story takes place in the course of two weeks in October in the year 72. Apart from one brief visit to Ostia (the port where all the luxury goods wanted in Rome arrive from all over the empire), we stay in Rome.
A birthday present is lost, a baby found, another one expected, a stray dog adopted, a wedding planned and held, and in between all those developments in the informer Falco's home life, he has to deal with the most ruthless and powerful head of Rome's organized crime.
Some people are killed, and while the reader does not much regret the death of two of these, at least two other characters die who we would have liked to keep, maybe even having them reappear in later books of the series.

Again, the author has done everything to make daily life in ancient Rome plausible and alive. Usually, I am not one for parallel reading of more than one book at the time, but I have been making an exception on this one, having started on "Daily Life in Ancient Rome" by Jérôme Carcopino, a non-fiction work which is the perfect complement to Lindsey Davis' series. 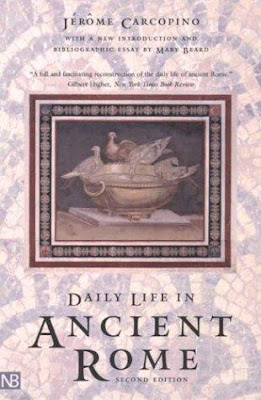 There is one more of her Falco-books on my shelf, which I am going to start probably tonight.
Posted by Librarian at 09:26