Catching Up: A Birthday Party

What with me having been away for a week to work at the GamesCom in Cologne and having RJ staying with me for several days before that, I have some catching up to do not only blog-wise, but obviously with some household stuff such as washing and ironing as well, while at the same time getting back into my normal pattern of work and sleep, sports and play.

Therefore, only now, more than ten days after the actual event, am I posting about my mum's birthday party.

All of July and August, the weather here was very unreliable and mostly way too cold with a lot of rain. Some mornings in July, I even had the heating on for a little while! So we had to plan things in a way that bad weather would not mean the end of the party.

I have written about my parents' allotment several times before, for instance here, showing pictures of the garden and the shed they have there. For smaller gatherings, we often use the patio in front of the shed, but for mum's birthday, there would not have been enough room for the roughly 20 party guests (ourselves included).

The allotment is part of a larger area of similar gardens, and everyone who has a garden there has to be a member of the local gardening club. Now, this wouldn't be for me (too many rules and regulations to observe), but there are some advantages to it, such as having a fence around the perimeter, a parking space and well-maintained paths as well as running water and toilets, and although my parents are not happy about each and every rule, they have adapted to it and made some good friends among the other garden owners there.
Another advantage is that there is a communal area the members can use for free: tables, chairs, a fully equipped kitchen, a bar, and enough space to have rather big "dos" indoors as well as outdoors, and my mother chose to have her party there.

At first, my sister and I were not particularly enthusiastic about the idea, because, frankly, we thought the place looked a bit shabby, not pretty enough to celebrate such an important event. But there simply were no alternatives, and since it was of course for our mum to decide where she wanted to have her party, we organized everything to make it a really beautiful day. 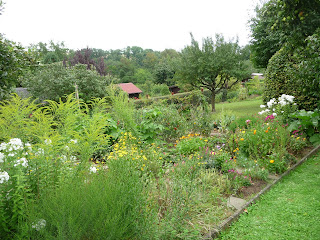 We were lucky with the weather - as you can see in this picture of the allotment, it wasn't overly sunny and hot, but dry and warm enough for us to set up the tables and chairs outside. 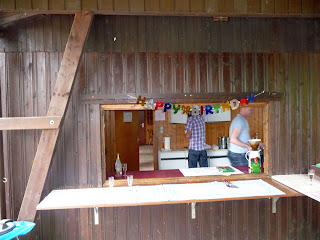 We put up some decoration as well, like this "Happy Birthday" garland. There was a lot more; we had candles and lanterns everywhere, but there are people with their faces visible on those pictures, so that I can not show them here - most people are very sensitive about their pictures being posted on the internet, and I have to respect their wish. In this case, the two men in the background are not recognizable except to those people who know them anyway, and therefore I have decided to use this picture. 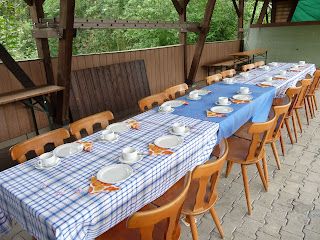 The tables and chairs... 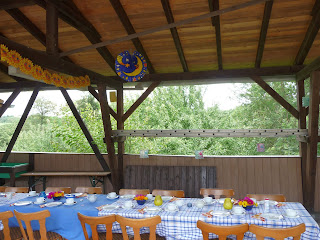 ...and some decoration on the tables, flowers from the garden and citronella candles (these are supposed to keep flying insects away). 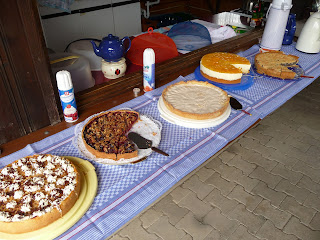 My mum had sent out her party invitation by email, asking everyone to not give her any presents, but to bring food instead and get in touch with me, so that I could keep track of what was going to be there - we didn't want to end up with 5 bowls of the same kind of salad and nothing else! As you can see, we had plenty of cake :-) (From left to right: apple, plum, pear, peaches & cream, poppy seed) 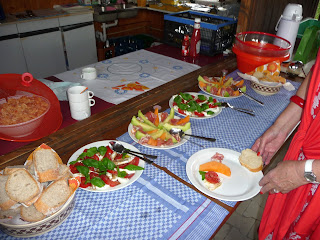 As the afternoon wore on and everyone had had some cake, we got the food ready for the evening. I do not have pictures of all of it, only of the starters which consisted of Caprese (tomato, mozzarella, basil) and melons & ham as well as some mediterranean-type vegetable antipasti and baguette bread.
For the main course, there was plenty of meat (chicken legs and others), spuds salad, pasta salad, and at least two other types of salads.

My contribution to the buffet was one of the salads and, for dessert, fruit salad which I made out of what you can see here: 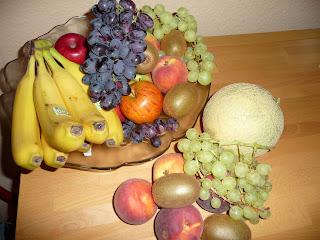 It looked like this when I was finished chopping everything up, which took me about 3/4 of an hour :-) 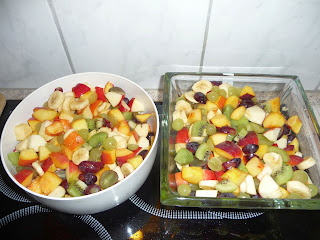 It was the wonderful afternoon and evening my mum deserved, and we all had plenty of fun (and plenty to eat!).

PS: It was pointed out to me that, in fact, making use of the communal area did not come for free. My parents paid a small fee for using the place, including water (no electricity, since there is only a generator which we did not want to use for the noise it makes). It still was a lot less than what it would have cost to have the party at a restaurant, and it was more fun that way.
Posted by Librarian at 23:06