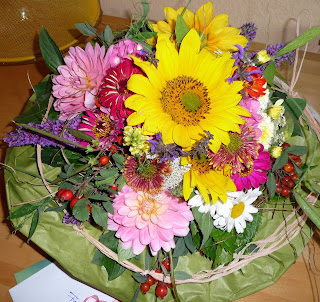 Not every month, but from time to time, I like to take the occasion of turning another leaf in the calendar to write about either the past month, or the one that has just started, or both. The last time I did this was in June.

August has begun today, and for me, it is the first month of permanent employment with my new boss. The trial period of three months ended on Friday, and I received a very good email from him on Friday evening - not that I had doubts about me passing the trial period, but one can never be 100% sure of such things.

Some mornings, it was so cold I had the heating on, and it rained almost every day. Several times I meant to go for a run but couldn't (well, I know I "can" go for a run when it rains, but I don't want to), and attempts to spend some sunny hours in the park like I did last summer were usually thwarted before I even left the house.

Still, it can't have been too bad - look at the rich bounty I got from my parents' garden the other day! 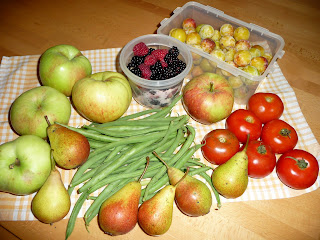 The flowers, by the way, were given to my mum from the parents at the kindergarden where she reads stories to the little ones once a week, to thank her for her voluntary work.

Now I am hoping for August to be more summery than July!
Posted by Librarian at 17:34