Not that long ago, I wrote here about how noisy my neighbourhood can be during the day.

On the last weekend of July, the young family downstairs moved out; I'd known about their upcoming move for a while, but they had always been saying it would be the middle of August, so I was quite surprised when it happened two weeks earlier.
The parents of the young man who live upstairs also left at about the same time; not to move out, but to spend the next half year in their home village in Turkey.

That left me and the cat on our own in the whole house, and I can not even begin to tell you how much I enjoyed the peace and quiet! Even outside, now that the school holidays have begun and a lot of companies have closed down for two or more weeks, it is much quieter; less cars, less lawn mowers, less hedge cutting and so on.

One morning, I took my camera round to the back of the house, where I usually do not go, since I consider this to be the downstairs family's garden (in truth, 1/3 of it belongs to me, but I never sit there). 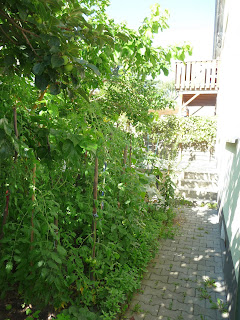 It was all very green and quite overgrown, and very quiet, with all windows and the glass door to the patio closed and with no curtains on them anymore.

Even just looking at the closed door of the downstairs flat, although the door itself looks exactly the same as always, made me feel how quiet and empty the house was. 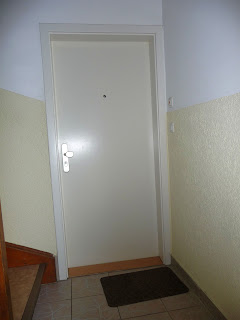 Was, I say - because yesterday, the new tenants for the downstairs flat have moved most of their furniture in already. I met them when I emptied the bins, and we had a quick chat; they are a couple, a bit older than I, and have a cat (who was of course not with them just yet). They do not sleep here yet, there's still some stuff they need to sort out, but the quiet period is as good as over; I am quite sure I will get along with my new neighbours fine, but I wouldn't have minded to be on my own in the house for a little longer.
Posted by Librarian at 12:35