For a change, I've read something in German (well, I do that regularly anyway; my weekly paper comes in German, and when I am waiting my turn at physio therapy, I usually scan the local daily paper there, which is of course in German).

This little book of 187 small pages was actually a very belated birthday gift from a friend of mine who came to see me the other day. She had intended to come to my birthday "do", but her father-in-law got very ill and so they went to the opposite end of the country to be near him. All spring and early summer, they travelled back and forth, and we never had time to see each other until two weeks or so ago. 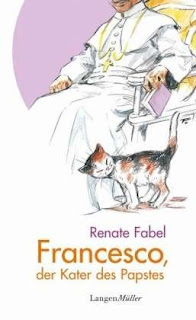 As you can guess from the picture, the title means "Francesco, the pope's cat".
It seems an odd choice of a gift for me, since I am neither Catholic nor particularly interested in the pope's life, but my friend knows I have a cat, and she thought I'd enjoy a book written from a cat's perspective.

Well, I did - sort of. Please do not get me wrong; I do not want to sound ungrateful, as if I did not appreciate my friend's gift. I did! But... the story itself and the style in which Renate Fabel has written is simply not really my cup of tea.

The story starts in Bavaria, where the current pope is from, and where he and the farm cat get to know each other. The pope (who at the beginning of the book is still a cardinal) decides to take the cat with him to Rome, where they live together in his apartment. It takes the cat a while to adapt to the new surroundings, and just when he gets used to everything, the cardinal becomes pope and has to move. No pets are allowed there, and the cat is given to a gardener and his mother. He sneaks into the Vatican gardens almost every day and meets the pope there, having a short break on a bench.

That's really about it - we accompany the cat to the Forum Romanum, where colonies of half-wild cats live, we meet some friendly and some less friendly cats, and learn a bit about how bewildering it must be for a pet when their humans take decisions and change things without them understanding what is going on.

There are some charming illustrations in the book, by the author's husband. 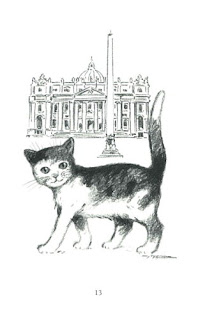 It is a lovely little book and I know just who of my friends would really like it - but the subject is not "mine", and the style, although written from the cat's perspective, is not "mine", either. Sometimes the cat or the people in the book use Italian expressions. These are not always correct, something a good editor would have checked. But now that's just me being picky.


Sorry - this was such a well-meant present, and here I am, taking it apart. But all of my book reviews show my honest opinion, and this one is no exception.
Posted by Librarian at 09:49