It's been a while since my last installment of recipes for dummies; pizza for dummies was, I just discovered, in January 2010. Therefore, it is time for another recipe, and on Sunday night, I decided to make Spätzle. Kässpätzle, to be more precise.

Spätzle is the Swabian staple food - or at least it used to be. Of course it has been replaced by more or less the same combination of convenience food and fashionable ingredients you will find almost everywhere in Europe, not just in Germany, and not just in the South West, where I was born and (mostly) raised and still live. But a good Swabian Hausfrau still takes her pride in making her own Spätzle, and it is not difficult at all - if you have the right equipment.
But what exactly are Spätzle? The term literally means "little sparrows", but don't worry - we do not really eat sparrows, let alone the little ones! They are not pasta, either, although they go well with most pasta sauces, with gravy or just topped with some butter and roasted breadcrumbs.
Kässpätzle are Spätzle baked with cheese (Käse = cheese) in the oven, and although I did not do that the entirely classic way, the result was still very nice, and RJ (who helped and took all the pictures) and I finished the whole lot along with a big bowl of lettuce. 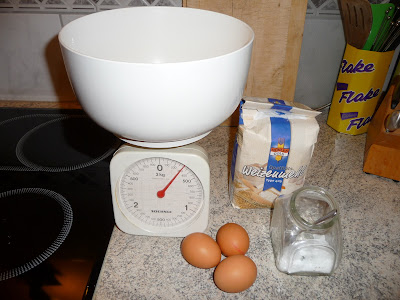 You need (as either a side dish for four or a main dish for two):
300 g flour
3 eggs
salt
warm water

Start by putting a big pot of water on the stove. I can not tell you how many litres of water I use, but it is my biggest pot - the Spätzle have to "swim". Add salt and put on maximum heat. At the same time, switch the oven on to somewhere around 200 Celsius. 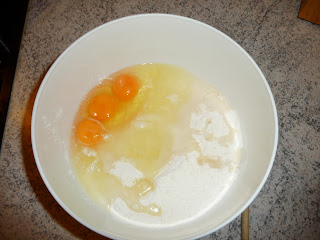 While the water is taking care of itself, mix the flour, a pinch or two of salt (this is really up to your own taste, but don't make them too bland or you won't like them) and the eggs in a bowl. You do not need a mixer, just use a wooden spoon - it gives you a much better feeling for the texture of the dough. 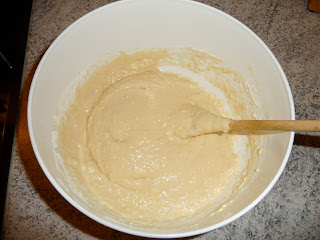 The eggs alone do not provide enough liquid, and to use another egg would only make the dough too thick, so use several table spoons full of warm water instead. The amount varies and depends mainly on the size of the eggs. In this case, I used 9 spoons full, first adding three and stirring the dough, adding another three, and so on, until the dough felt and looked right, as in the picture above: smooth but not liquid, and not too firm, either. 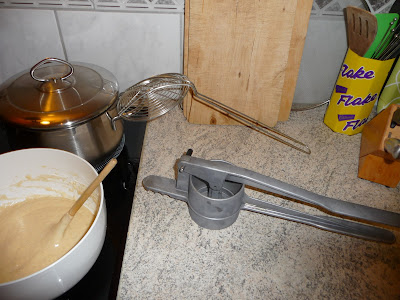 And here is the "Spätzles-Drucker", the press you need to make Spätzle (there is another method of making them without the press, but I can't do it and therefore won't show it here). Usually, when a Swabian girl got married, she brought her own Spatzedrucker into the household, but I doubt this is still the case nowadays. My mum still has and uses her original one, and my parents were married in 1965. Mine is newer, I bought it for myself maybe 20 years ago. 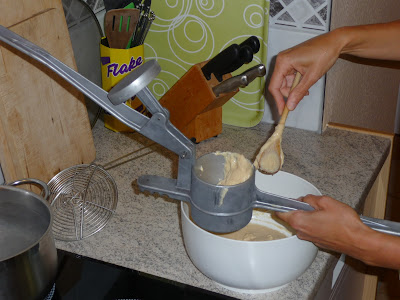 Fill the dough into the press. It won't all fit in in one go, but that does not matter (see - one really needs both hands to do this, and because the dough is not firm, it has to happen rather quickly; therefore, taking pictures at this stage was only possible with RJ's help). 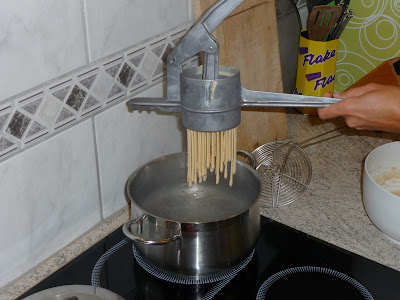 By now, the water in the pot should be boiling. Properly boiling, not just simmering. Hold the press above the water and press down - what's coming out at the bottom are the raw Spätzle. 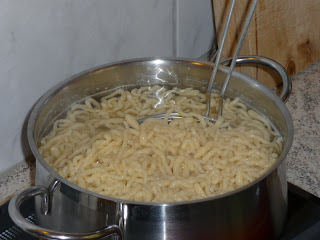 Now stay there and watch the Spätzle - they only take a minute or so in the boiling water! As soon as they rise to the surface, get them out with the thing I do not have an English name for - it is a bit like a strainer, but on a long handle, and essential for making Spätzle just like the press is essential. 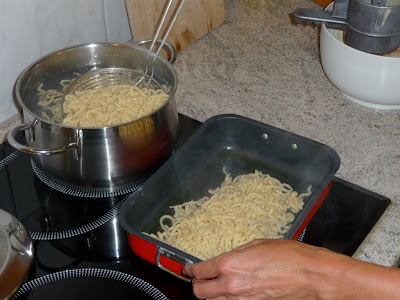 If you want to eat the Spätzle with gravy or lentils or roast onions or any other way, they are ready to eat right now. But if you want to make Kässpätzle, they need to go into a deep baking tray. 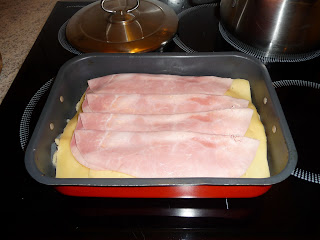 The classic way is to mix grated cheese into the Spätzle, but we put slices of cheese and ham on the first layer. 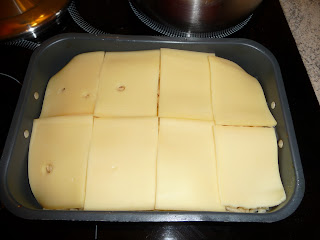 The second layer was covered by more cheese, and then the whole thing went into the oven for somewhere around 15 minutes. Just keep on checking that the cheese does not get too brown and bitter; use that time to start washing up :-) or lay the table and put the vinaigrette on the lettuce. 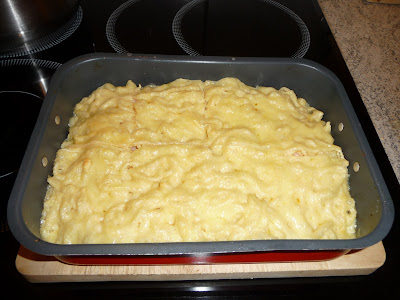 It was just right when it looked like that... 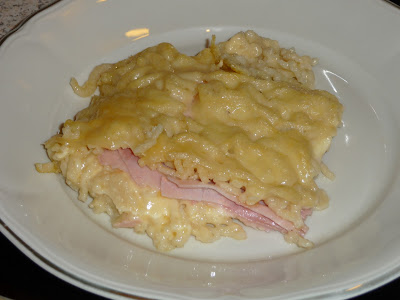 ...and on the plate, it looked like that.
A very, very filling dish - you will only want a very small dessert after that :-)


By the way, Spatz or Spätzle (sparrow or little sparrow) is also used as a term of endearment for a child, a girlfriend or... a cat (I often call mine Spätzle and she does not seem to mind).