Written by Jeff Evans, a true fan of the series, this „Making of“ covers many different aspects of Midsomer Murders and includes a foreword by John Nettles as well as an episode guide for the first 23 episodes. 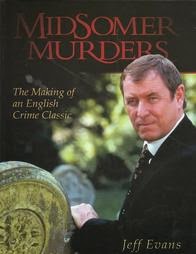 Although I have not (yet) read any of Caroline Graham’s Inspector Barnaby novels, I found it interesting to read about how – and why – the characters in the TV series partly differ from those in the books. Also, the way a story may work very well in paper but will require some tweaking for a successful transfer to a totally different medium (such as TV) is explained. The process of evolution from the first draft of a script to the finished episode is described, and if anyone has ever doubted the amount of work and effort going into each and every minute we later see on telly, they will understand a lot more after having read this book.

Details matter a lot; for instance, finding the right location can be a big challenge, and every little thing needs checking thoroughly. For example, the name of a fictitious surgeon in an episode must not correspond to any real-life counterpart of the same – or even just similar – name in the area.
While the episode guide will not be the most interesting read for everyone, it provides some background information about the impressive list of guest actors with little snippets of filming memories that I found quite entertaining.

Of course, since the book was published in 2002, long before some major changes occurred (Barnaby’s sergeant was replaced twice; eventually, Barnaby himself retired and was replaced by his “cousin”, who in turn has recently been assigned a new sergeant; Barnaby’s daughter marries, and so on), it seems strange now to read some of the statements that sound as if the main cast was set in stone. But that is natural with a series as long-going as Midsomer Murders, and does not take away from the pleasure of this book.
Posted by Librarian at 07:38