"The Squire of Sandal-Side" by Amelia Edith Huddleston Barr was first published in 1887 and is subtitled "A Pastoral Romance". 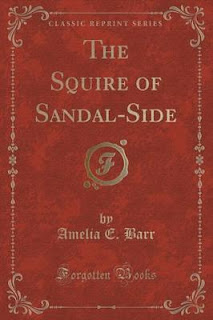 I wouldn't know what constitutes a pastoral romance, but a romance it certainly is: The novel deals with the love and friendship between two families, between parents and children, men and women, servants and their masters, folks and their land, people and their home.
Misguided love has bad consequences not only for the lovers, but for everyone around them, just as true love brings out the best in people and works wonders in seemingly hopeless situations.

The location is Cumbria, where two families have lived and worked side by side for generations. The Latriggs are the wealthiest sheep farmers around, industrious and honest, very popular with all their shepherds and everyone else around. The Sandals were once richer than they are now, but are still well off and very much regarded as the nobles of the place. The elderly Squire, his wife and two daughters are gentlefolk in the best sense, usually not feeling above the Latriggs who are not of noble birth.
Still, the idea of one of his daughters marrying a Latrigg is not entirely pleasing to the Squire, and he invites a young male relative to join them for the summer, hoping that Julius will fall in love with Charlotte or Sophia, in order for a marriage to remain within their own rank in society, and to keep family seat in the family for future generations.

Sadly, the plan backfires - there is indeed a wedding, but unhappiness follows. The newly married daughter changes under her husband's influence, and the young couple soon make life for everyone at Sandal miserable.
The other family members try to be loving, kind, and patient, but even their goodness is exhausted at some stage, and after the old Squire dies, dramatic events unfold...

However, true love and friendship step in, a long-guarded family secret is brought to light, and all ends well - except for the annoying couple.

I enjoyed reading this old-fashioned novel on my kindle (of course mine is a free ebook) for a few weeks on my way to and from work. The language is not so old-fashioned as to be difficult to read.The countryside, houses, places and people are well described; I could really picture the events in my mind.
The relationships between the various characters are credible and at times surprisingly modern, while every now and then I felt like shaking the protagonists and shouting at them for their stubborn stuck-fastness in the morals and etiquette of their time. Amelia E. H. Barr was an author I had not heard of before. She lived from 1831 to 1919 and was from Lancaster. With her husband, she emigrated to the U.S., where sadly he and three of their six children died of yellow fewer.  To support the family, Amelia worked as a tutor, but quit that line of work when she earned enough from writing. In July 1918, she suffered a sunstroke and died less than a year later. She published nearly 30 novels and an autobiography.
Posted by Librarian at 09:28