Yet another free ebook I enjoyed was "Touching the Clouds" by Bonnie Leon. 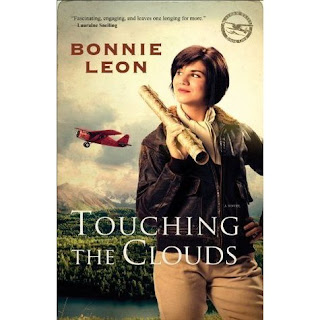 The story is set in the 1930s, at the time of the Great Depression. A young woman decides to leave her parents, their apple farm in Washington State and her fiancé behind in order to live her dream of becoming a bush pilot in Alaska.

A decision like this would certainly require either a lot of courage or foolhardiness - maybe both - at all times, but in the 1930s, it was even more unusual for a young woman not to follow the traditional pattern of getting married and settling down with her husband, producing a number of children and being more or less content with her lot.

And then to choose Alaska, of all places! A few times, Kate has to ask herself whether she has done the right thing, especially when the roughness of the wilderness becomes life-threatening for herself or those she cares about. But she soon realizes she does not want to be anywhere else, and fully embraces her new life.

There is also a new love interest (of course!), and although Kate is a really good pilot, being a woman often means she has to work extra hard to convince others that she knows exactly what she's doing.

Alaska is described so well in this book that even I, who has never been much interested in a place as cold and wild as this, could picture it and found my curiosity piqued about places such as Anchorage, Kotzebue and others as they were in the 1930s.


Flying plays an important role in the book, and sometimes I found the technical detail just a little bit too... detailed. I've been on very small planes myself, as you know if you have been following my blog for a while, and can therefore maybe relate better to those parts of the book than someone who hasn't, but I think these bits could have been shortened without losing important story material.

I particularly liked how the day-to-day lives of the people in the wilderness - a mix of immigrants and natives - are described. The hardships they endured, especially (but not only) in winter, are amazing, and even more so considering most of them choose that way of life themselves.


Not for me, the spoiled city girl who very much appreciates her central heating, hot water at all times, washing machine, well-stocked fridge and shops within walking distance!

At first, I thought it was the first book I've read by this author. But a quick search on my blog showed that, 4 years ago, I read "To Love Anew". You can find the review here if you are interested.


That book was a lot more about faith and God and revenge and forgiveness; "Touching the Clouds" is less insistent at that. It does mention people wondering about God and praying to him, but it's all part of the story and pretty realistic, I think, to imagine someone in distress (such as a pilot on a dangerous mission) praying even if they do not lead exactly a religious life otherwise.

Bonnie Leon's blog tells me that there are two more books about Kate and her adventures as a bush pilot in Alaska, and maybe I'll have a look for them at the kindle shop, too.
Posted by Librarian at 08:31