Published in 1902, after having read several contemporary books in a row (some really good ones, some less so) this came as a refreshingly old-fashioned excurse into a time when elegance was not only emphasized more in clothing but also in language.
(To call something refreshingly old-fashioned may seem a bit odd, if not altogether impossible, but I think you know what I mean.) 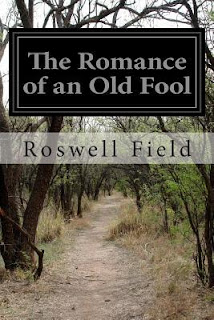 This novelette by Roswell Martin Field was as predictable as it was short - but I enjoyed it nonetheless. It has wit, a small set of characters, a simple plot that was easy to follow, and just gently and humorously flows along like a small babbling brook next to a path in the woods on a fine, calm summer's day.

The narrator, John Stanhope, is 48 years old and recently (but not unhappily) widowed. He travels from the big city to the village of his childhood, where he rekindles old acquaintances and makes new ones.
Soon, he comes across Phyllis, the 22-year-old daughter of his old flame, now orphaned. And the inevitable happens: He falls in love...

How this romance of an "old fool", as he calls himself, plays out I am not going to tell you here - read the short (free) eBook for yourself, if you like.

But one paragraph I found particularly poignant, because I read it on the "Day After" on the train to work and found it very fitting:

Mary Eastmann had accepted the situation without comment. She neither congratulated nor demurred, but went on with her household duties with the same method and precision as before.
Men may come and go, hearts may be won and lost, republics may totter and empires may fall, but the grand scheme of sweeping, dusting, bed-making, and cooking knows no interruption.

I find I have that in common with Mary Eastmann, finding comfort in the most banal of household tasks when I'm upset.

What I could find out about the author is sparse: Roswell Martin Field was an American journalist and writer. He lived from 1851 until 1919. (Therefore, he was around the same age as the narrator at the time this book was published - and I wonder how much of the real Mr Field is in the fictional Mr Stanhope.) He wrote several books and sometimes collaborated with his brother, Eugene Field, who was a poet and is much better known.
Posted by Librarian at 08:51