There are books and names of authors "everybody" knows, even if maybe we have never actually read the book. "Moby Dick" is one of those books, with probably a large percentage of (not only) the English-speaking world having come across the author's name at some stage.
But how many of us have actually read "Moby Dick" or know something about Herman Melville? Admittedly, I am one of those who'd have to answer "not me".

I knew the author's name, of course, but of Moby Dick I only know the film starring Gregory Peck as Captain Ahab. I found the story gruesome and the film not at all entertaining, and so was never really induced to find out more about the author and his work. 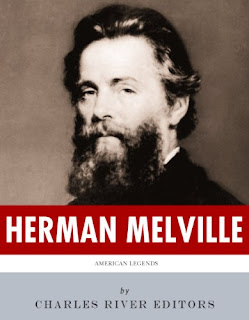 Still, I was interested enough to download this free ebook about him. It is part of a series of books aiming to "provide superior editing and original writing services, with the expertise to create digital content for publishers across a vast range of subject matters".

Anyway, I did enjoy reading this brief account of Herman Melville's life and work. It is neatly presented in 8 chapters and comes with a handful of illustrations. Until now, I did not have the slightest idea that Mr Melville had such a tragic life; his career as a famous author was solely based on his first two books, and "Moby Dick" was published many years later, when he had already pretty much disappeared into obscurity. The story was only properly discovered in the 1920s and has since then risen to become one of the best regarded classics of American literature.
Melville died in relative poverty, almost completely unnoticed by the literary world, a forgotten genius who seems to have enjoyed only brief periods of happiness in his life.
His wife, only briefly mentioned in this biography, must have been exceptionally kind, loving and generous. She battled alongside her husband against his alcoholism and frequent bouts of depression, apparently being instrumental in several victories. It was also thanks to her skill and intelligence that the family, although veering on the brink of bankruptcy a few times, recovered enough to allow the ageing couple a level of financial security.

I think I'll look for a few more books in this series. They are not much longer than a special feature in a magazine would be, and are really perfect for my trips to and from work.
Posted by Librarian at 07:31