Last weekend was unusual in that, for the first time in a long time, we did not go for a long walk or hike. We were at O.K.'s, and part of the time was spent doing jobs around his parents' house, such as cutting the ivy that was getting very much out of hand. I found another bird's nest (empty, of course) to add to the one I used this year for my Easter decoration.

Saturday started sunny but it was rather windy, and rain was forecast. The original idea had been to have a family BBQ at the allotment of O.K.'s parents, located just outside the village at the edge of the woods. But we decided against having it there, as there would have been no proper shelter. Instead, benches and a table as well as the grill were set up in front of the house. O.K. parked his car outside so that in case of rain we could quickly move into his garage - which we ended up doing long before the meat was done. 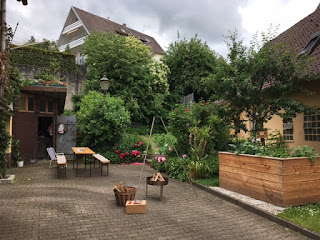 O.K. and his father bravely manned the grill in pouring rain, one of them holding an umbrella so that the other one could turn the meat over and look after the fire. It was fun, with food and drink being nice as always, and plenty to talk and laugh. Typically, the rain stopped not long after we had finished.

In the picture you can see the set-up before we moved to the garage. Look at the clouds gathering behind the house at the top end of the garden! The raised bed to the right was built last year by O.K. as a present for his mother's 80th birthday. 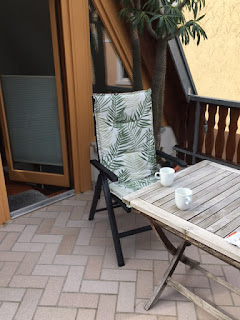 Sunday saw more rain. We tried to sneak in a walk around the village between showers, but what had begun as a slight drizzle developed into more while we were out, cutting our walk short. Never mind, I managed to finish the book I have reviewed in my previous post.

The picture above is from O.K.'s balcony, taken on Saturday morning when we were able to have coffee outside. O.K. recently bought new chairs, after the old ones were about 25 years old with the metal rusty and the arm rests beginning to flake. My contribution were the cushions, two with the pattern as shown in the photo and two without, just green, to mix and match. That weekend was the first time we used them.

Taking the usual train home on Monday morning, I was pleased that everything was on time, and I was at my desk half an hour before the first meeting of the day started.