After we left Fountains Hall, we had Fountains Abbey right ahead of us. It was as impressive a sight as ever, and we were glad that, again, there was hardly anybody about. 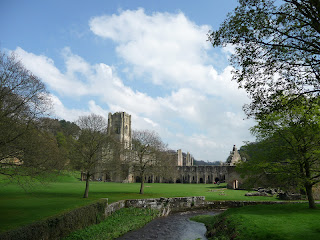 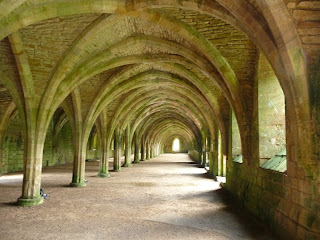 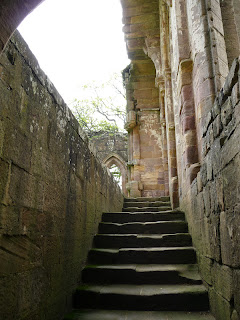 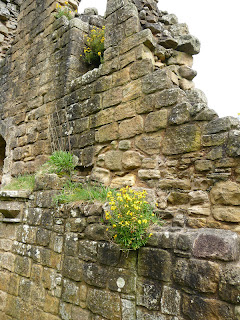 The wild flowers growing between the stones add a lot to the ruins, don't you think?
This is only a small selection of pictures I took that day; to look at them all (don't worry, there are not hundreds of them, less than twenty, actually), click here and then click "next".

Fountains Abbey was founded in 1132 by 13 monks who left York, where life at the monastery had become too luxurious and preoccupied with politics for their liking. They wanted to revert to the strict rules of living a spiritual-oriented life of modest humility, poverty and prayer.  Less than a hundred years later, though (obviously none of the original founders were around anymore), Fountains Abbey had become the most wealthy and powerful of all monasteries in England. So much for leading a modest life in holy poverty!
In 1539, Henry VIII dissolved all monasteries, which of course applied to the abbey as well. The stones, glass panels and lead from the windows and anything else that had any value was used in building other houses, mostly in Ripon, but some even as far away as York; the abbey was reduced to a convenient self-service stop, a kind of early B&Q.
After having passed through several hands, in 1767 the Aislabie family bought the land for 18.000 £, and had the fashionable ruins incorporated into their landscaped parkland so that they could be viewed from Studley Royal, their water garden.

That meant the ruins were now relatively safe from more plundering, and I think we can all be grateful to the Aislabies for not having allowed them to completely disappear.

The water garden is very beautiful, too, but I did not take many pictures there, I'm afraid.
This spot piqued my curiosity: 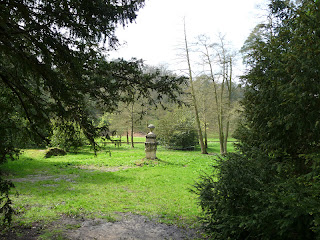 A sign next to it explains that, unlike with most of the other parts of the vast parkland, the original look and purpose of this place is unknown. There is always plenty of restauration and conservation work in progress all over the abbey grounds and Studley Royal, and if I remember correctly, the National Trust are planning on doing some digging here to find out more about what this once was.


At this point, we had been walking lots, and our delicious and substantial breakfast had been eaten enough hours ago for us to be hungry again, and so we went for a snack at the tearoom situated on the edge of Studley Lake. It is in a pretty building dating from victorian times and originally was the home to the estate stewards. 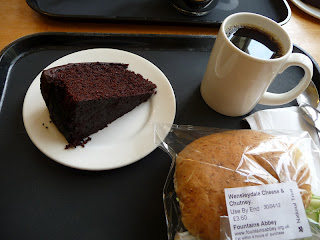 The price of that cheese sandwich seems very high - well, it was good and rather large and filling, and once I had that piece of rich & thick chocolate cake, I felt as if I wouldn't be needing anything to eat for weeks to come :-)


We walked back through the deer park, along Studley Roger's main road, across the fields and into Ripon. 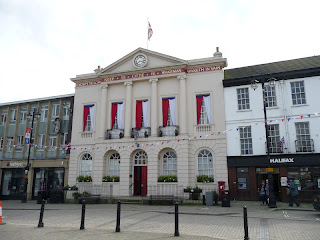 Before we retreated to our room at Box Tree Cottages, we went to have a look at a house which once was the home of Lewis Carroll: The Old Hall, next to the cathedral. His father was canon there. Jenny, I thought of you when I took this picture: 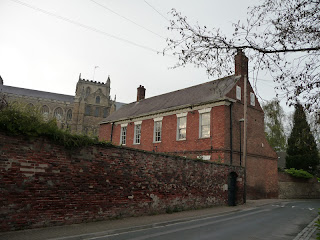 That was pretty much Day One - certainly a Good Day!