The oldest tradition going on daily (or, rather, nightly), and unbroken, I should say.
What is it?
You'll soon find out, and of course I have no way to "prove" this claim to be true, but it sounds all quite believable.

Let's skip back two posts to where I ended my description of Fountains Abbey and pick up from there.

Our 2nd day in Ripon began with another big, delicious, full English breakfast. As this B&B has only six rooms, the whole place has a cosy family feel about it which also becomes obvious in the breakfast room, where people say good morning to each other and begin conversations, something that is rarely done in large hotels unless you know the other guests.
A friendly couple in maybe their late 50s was already sat at the table when we came in, and we started talking. I made a remark as to how I found it a pity that the church opposite the B&B had no bells chiming (I have written about this topic here), to what the lady and her husband looked at each other and smiled. She then said it was funny I mentioned church bells and that I actually missed them, when they were coming from a place where the bells had just been ordered to stop chiming after a couple of newcomers had filed a complaint against the noise.
Back in our room, my sister looked this up on the internet and we found, among other articles, this one. It seems incredible, doesn't it?

Today did not look quite as nice, weather-wise, and so we decided to take the bus to Harrogate and browse the shops there. It was a pleasant day with plenty to look at; I didn't buy anything, but I do enjoy window shopping (and having a closer look inside a shop that looks interesting) without necessarily having to "have" something.

We returned in the afternoon, and I stopped at Mary's again for a chat before joining my sister at the B&B, where we waited for the arrival of my aunt and uncle, J and B. We had arranged with them to stay one night at the same B&B so that we could spend an evening and all of the following day together, and were very much looking forward to that.
J and B arrived, and we decided to take a meal at one of the pubs in Ripon. Since the Unicorn had re-opened not that long ago after renovation, and I had not been in there yet, we went there.The food was good and the company excellent! Just before 9.00 pm, Aunt J said that we could catch the Hornblower setting the watch if we left now - and so we did (which lead to me leaving my little brolly under the table... we looked for it the next day, but it had obviously found a new owner, and I hope it will be a trusted companion for them as it had been to me for years, withstanding strong winds, snow, hail and rain on many occasions).

The Setting of The Watch by the Ripon Hornblower is claimed to be the longest on-going daily tradition in the world, dating back to the year 886, when Alfred the Great not only granted the place a Royal charter, but also advised them to do something about the safety of their community by appointing a wakeman.
So, since that year, every night at 9.00 pm, the wakeman blows his horn to announce that the people could now safely retreat into their homes while he would be keeping an eye out for anything and anyone representing danger. This has been going on without interruption, not even by one night, apparently.
You can read a lot more about this tradition as well as the man who currently holds the position of Hornblower on this website. 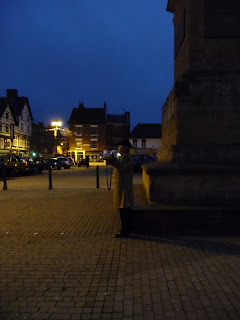 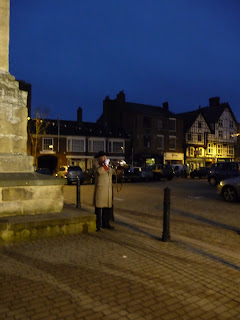 We found Mr. Pickles to be a most charming and friendly man, who obviously takes this part of his life very seriously without being pompous our sour-faced about it. After he had blown the horn at all four corners of the market cross, he asked whether the small group of onlookers (apart from the four of us, there were maybe three or four others, and a few local boys of maybe 10-12 years of age) wanted to hear some history. And that's how we learnt about this tradition, and were even given a lucky wooden penny each! 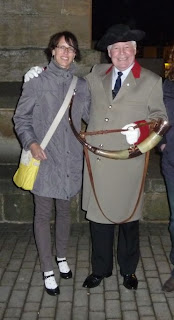 Funny, isn't it, that in spite of having come to Ripon so many times before, I've never been to witness the setting of the watch until that night, and I am grateful for Aunt J for having suggested it.

It was a cold night, and we were glad of our warm coats, and even  more glad to be back at the B&B, where we sat in the lounge together for a while, deciding on what we would be doing tomorrow, before we all retreated to our rooms.

And you'll find out what we did the next day tomorrow.
Posted by Librarian at 08:17