UNESCO had declared the 23rd of April to be the international day of books. My Mum, who goes to read to the children at a kindergarden once a week as voluntary work, was offered a choice of books specifically published for that day. The idea behind this offering (of a million books in total) was that they wanted it to make easy for people to give books as a gift to just about anyone, and thus inspire others to read, or read more.
Several books on the list I already knew, others I was not really interested in, so when my Mum asked me for my choice, I went for this book by Wladimir Kaminer. 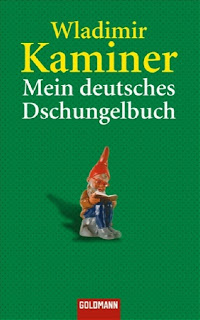 Mr. Kaminer is an author of Russian-Jewish origin; he is a year older than myself and has been living in Berlin since 1990. He has travelled extensively, not only in Germany, but this book (the title meaning "My German Djungle Book", borrowing from Rudyard Kipling's classic) is about what he found out about German and the Germans during his travels. Most of it is quite funny, some of it makes you want to laugh, then think again. And even the most absurd bits I believe did, in some form or other, really happen - because real life can be a lot more absurd and bizarre than any author could make up.

It offers an interesting point of view on what all the big and small cities, towns and villages look like to a visitor, how people react to a stranger in their midst, what the place where they live tells about them and how, no matter where they are, home matters a lot to most of them, even it does not seem at all attractive to the outsider to live in that particular part of the world.

I enjoyed this as a light and (mostly) funny read while I was on the train to and from the office yesterday, finishing it in maybe three hours altogether.

What made reading a bit difficult sometimes had nothing to do with the book, but with my environment; as I said, I was on the train, and there were a lot of other people, chatting to each other. When I read English, I don't mind people talking around me in German; I can blend out their "noise" and focus on what I am reading. But while I am reading German, which was the case here, hearing all that German natter in the background sometimes made it hard to stay with the words of the book. Every now and then, I put it down and listened to the more or less entertaining conversations of the people around me - quite a few glimpses into their lives there!
Posted by Librarian at 09:09