On the 3rd of May, my sister and I wanted to visit Newby Hall.
At the Ripon Tourist Information, where so far I've always only met very kind, friendly and helpful people, they told us that although it wasn't that far to walk there (just under five miles), it wasn't a nice way, and we were advised to take the bus to Skelton-on-Ure instead and walk from there. We did that, and made sure to take note of the time the bus would stop there again for us to get back - we didn't really wish to be stuck in Skelton for the night.
The way from the bus stop to the gates leading on to the Newby Hall estate is not very far. 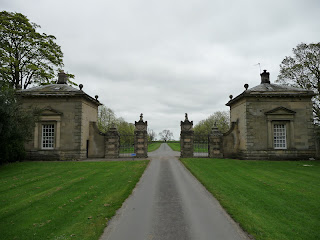 The estate itself is HUGE - you walk for about 1 1/2 miles among acres and acres of grassland, with sheep grazing as far as the eye can see. 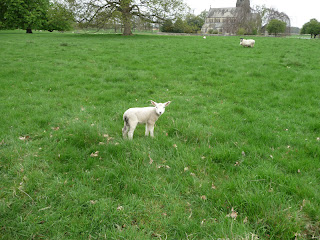 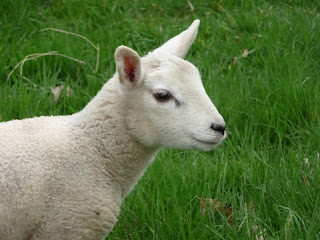 If it had been a sunny day with blue skies, this picture would have been the epitome of pastoral bliss in the English countryside, wouldn't it? 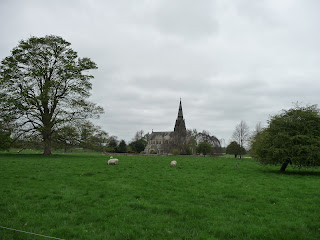 We were getting closer now - that's Newby Hall in the distance! 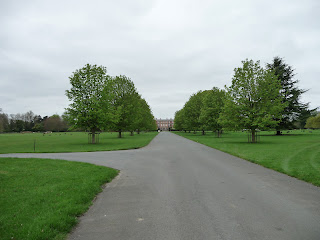 On buying our tickets, the kind people there told us that a tour at the Hall was just about to start, and they rang the house for us to announce two more, showing us which way to run in order to catch the tour. So we hurried along the winding path, catching only glimpses of the beautiful garden on our way, but we knew there'd be plenty of time for that later. 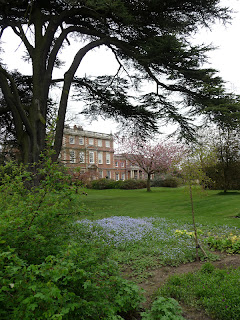 Inside the Hall, just like at Ripley Castle, photography was not allowed, but you can find pictures and information on their website. Once again, this place has been (and still is) inhabited by the same family for a long time; not quite as long as Ripley, but since 1748 is impressive enough, isn't it?

By the way - when we arrived (slightly out of breath) at the Hall, we were told that the current tour had just left, but it was just one lady on her own. The tour guide that had been waiting for us offered to take us on our own personal tour as well - that was very interesting, and of course, unlike when you are in a large group, you get to see more and can ask more questions, which our guide obviously enjoyed. She was a very elegant elderly lady in a navy trouser suit, sporting a Margaret Thatcher hairdo and wearing rather colourful make-up which prompted my sister to remark that she had probably been quite the stunner in her day.

The bus trip to Skelton, the walk (and the sprint on the last few hundred yards) to the Hall and the tour had left us in need of physical sustenance, and so our next stop was the tea room. 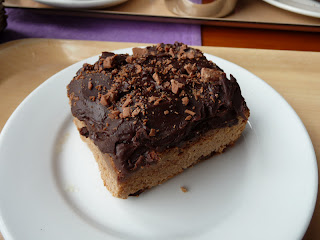 They had quite a variety of food and drink on offer, claiming it to be local and (some of it) organic (with matching price-tags...), and we both had sandwiches and this lovely chocolate cake as an extra treat. Believe me, it tasted as good as it looks! 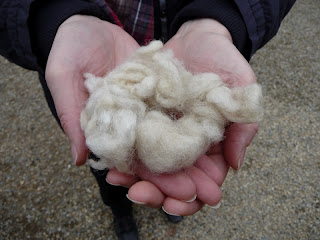 While we had been walking along the pastures between the sheep, my sister had been picking bits of wool off the wire fence (the sheep can get through and wander at will, but it stops people from walking across the grass, and probably some inconsiderate ones would not hesitate to even drive on it or park their car). If you'd really be up to it, you could certainly gather enough wool there to knit a jumper with! (Or at least a pair of socks...)

After our break, we ventured out into the gardens. We could have spent hours and hours there, but we knew we had to get back to Skelton in time for the bus. We did see the whole grounds I think; they are beautiful even at this time of the year when the famous double herbacious borders are still far from the glory you can see on the website. 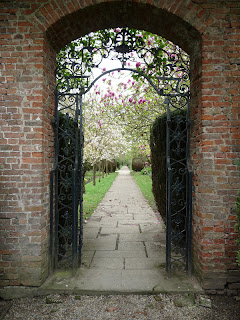 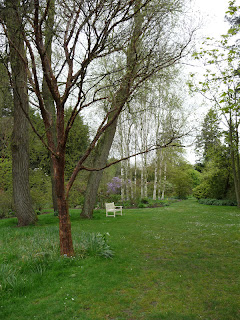 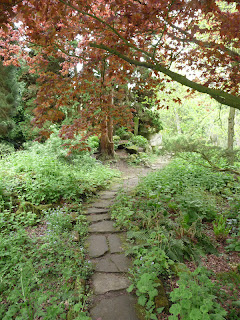 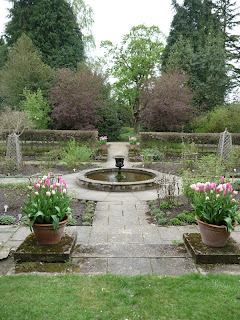 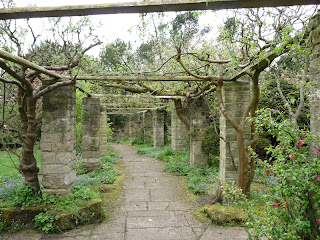 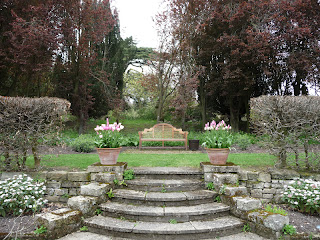 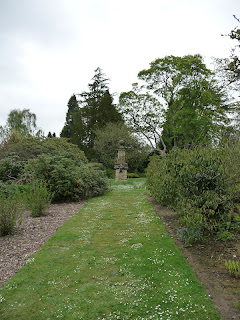 The column in the right picture is a memorial: In 1869, during a hunt, the fox crossed the river Ure. One of the men went one way to stop the hounds from pursuing the fox, but twelve other men and their horses got on the tiny ferry to cross the river. The ferry had only been intended for four horses at most, and their overloading resulted in six of the men drowning in the river. Apparently, the memorial only commemorates the lost hounds, not the men. And what the callous, cold-blooded Me thought in learning of this disaster was: I just hope the little fox got away safe and sound, and none of the horses drowned.

Of course, these are not all the pictures I took at Newby Hall and gardens. You can see many more on my photobucket album; just click here and then keep clicking "next" for a while :-)

We left the gardens... not through this gate, though. 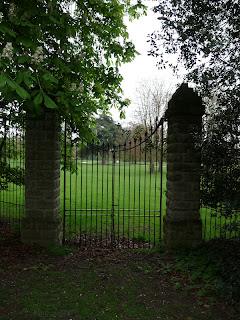 Walking back to Skelton,  we did not exactly retrace our steps but detoured by the church that you can see further up in this post from a distance. 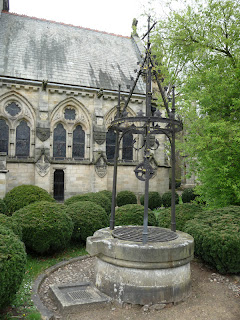 I don't think I've seen a church with a well in its yard before. What was its purpose? Surely not to draw water for baptisms? The short text about the church on the Newby Hall website makes no mention of the well.
Anyway, we were now back in Skelton and found that we had about half an hour before the bus was to arrive. A nice cup of tea or coffee would have been welcome, and we found a sign outside the tiny village store advertising accordingly. To our not very pleasant surprise, though, the slightly surly lady in the shop showed herself to be unwilling to allow us further inside the house than the shop itself; she obviously was getting ready for closing time (it wasn't 5.00 pm yet) and considered anything more than just selling across the counter too bothersome at this hour. So my sister got a paper cup of tea, not very graciously handed over, and we took this to the bus stop with us where we had no choice but wait - it wasn't feasible to walk around some more, since we really did not want to miss the bus and didn't know the area well enough to judge distances.
This was, in all our week there, the only person we met who was anything less than utterly friendly, welcoming and helpful. 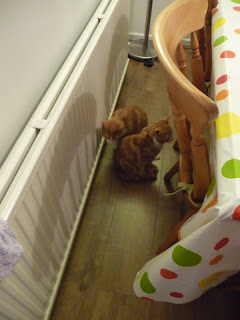 Eventually, the bus took us back to Ripon, and we spent a lovey evening in the company of my sister-in-law and her family as well as their cats, the half-year old twin brothers Ted and Dougal.
(Don't be fooled - they are nowhere near as meek and shy as they look here!)
Posted by Librarian at 11:17