Herbs, Rainbows and a Moth

On some of the blogs I am following, pictures of rainbows have been appearing recently. Isn't everyone fascinated by them? More than three years ago, when I had not yet started to add pictures to my blog (at least not often, I think), I mentioned a rainbow in this post, but I can't remember whether I have actually posted any pictures of rainbows before.

Well, here are some I took over the past few weeks - there were several occasions when it was really "raining from the sun", so to speak, and once I even saw a double rainbow. 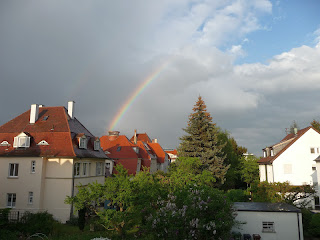 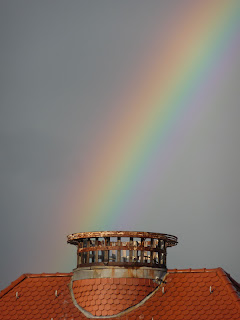 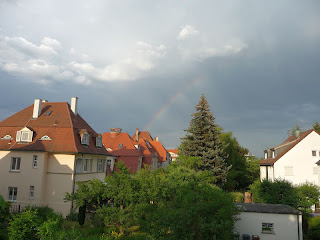 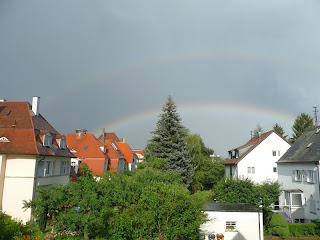 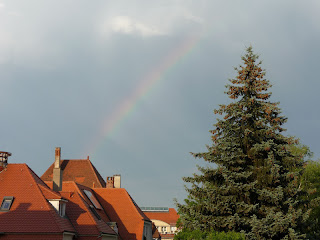 As usual, the best view of the sky is the one from my kitchen window; anywhere else from my flat there are houses and trees too close to the window for it to make a good shot.

For my birthday in March, I had been given a set of three paper cups with a tiny bag of seeds in each, and a compressed "tablet" of soil. The idea is that you pour water on the tablet and it increases its volume until the cup is filled with soil, and then you put the seeds in and wait what happens. I only started this after we returned from Italy, about a month ago. 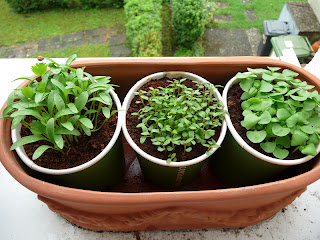 The set contained seeds for basil, coriander and thyme. In my previous post (a recipe), I said that I used some of the thyme, but it turns out I actually used coriander - just goes to show what an "expert" gardener I am :-) (or cook, for that matter!) 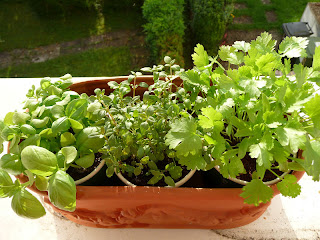 Never mind, it tasted good. I am a bit worried about the basil. It does look paler than it should, and I am not sure what's wrong - too much sun? Too little? Enough water, or not enough?
For the time being, I shall still buy the potted basil from the supermarket so that we can have our beloved caprese on the weekends.

Some of you (thinking of John and Graham here in particular) are great in taking close-ups of all sorts of insects and other animals. The other night, I found this little beauty on my bedroom wall just above the headboard. 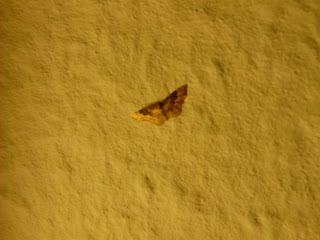 After several attempts that resulted completely out of focus, the best I could come up with was this picture. It was a small moth, probably not more than about 2 cm wingspan, but it was prettily patterned and I just left it where it was. In the morning, it was gone.
Posted by Librarian at 08:08