After we left Sirmione, we drove back to Riva on a different route than on the way down. It was a smaller road leading right along the lake, and very scenic.

At a place called San Vigilio we stopped; not only because we wanted a break from driving, but also because it looked very beautiful and the sun was shining, and we already knew that back in Riva it was going to be overcast and raining again. 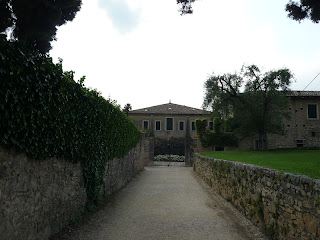 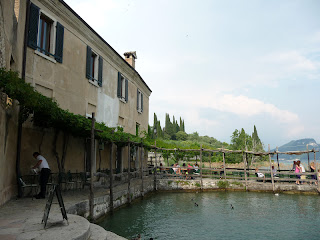 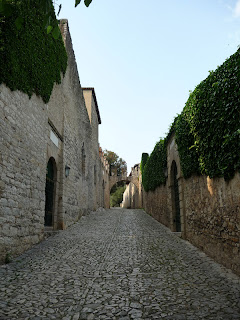 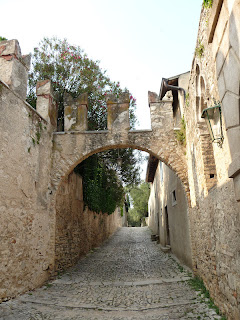 San Vigilio is a peninsula with a tiny harbour at its lowest end and a cypress avenue leading up to its highest point. The harbour, avenue and all the buildings are pretty much as they were 500 years ago - at least from the outside. Inside, there are restaurants and a rather exclusive hotel which has, the website tells me, housed famous guests such as Tsar Alexander III, Winston Churchill, Laurence Olivier and Vivien Leigh in former times and Prince Charles and King Juan Carlos from Spain more recently.
The villa itself is still in possession of the same family who had it originally built in 1540.

We didn't know anything about this place; we just thought it looked lovely, and enjoyed the serene and private atmosphere walking down the cypress avenue and the narrow cobbled street to the harbour. The café there looked as if the people there were all part of a private function, otherwise we would have stopped for something to drink and maybe a snack.

Instead, we just walked round a little more, took some pictures, got back into the car and drove the rest of the way to Riva.

Our last evening in Riva was spent partly at the restaurant that had become our favourite (we went there three times in the one week) and partly by dancing on the piazza in front of the old castle; this time, there was no band playing but they had a DJ and the music was enticing enough - but it started to rain (as expected), and so we didn't stay out very long.

On the next day, Sunday, we left Riva for good and arrived in Ludwigsburg at around 9.00 pm. It had been a long drive with a lot of traffic, but I always feel very safe with RJ in the car, since he is an excellent driver who always takes everybody else's movements into account (just like on the dance floor, really, but at rather different speed levels, of course!). 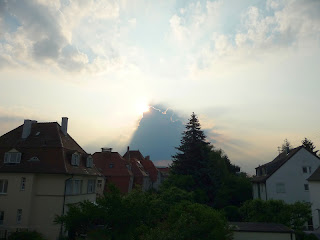 The view from my kitchen window at the time of our return.
Posted by Librarian at 08:13