This post is going to be rambling style, taking a leaf out of Scriptor Senex's book, so to speak; if you have not yet been to his blog, please make sure you go there, and I am quite certain you will not regret it.

I've been on about how I feel about the end of one and the beginning of the next month before, and a quick look at your own calendar will tell you that indeed we once again crossed such a threshold on this past weekend. It also marked the end of the first half of 2012 - unbelievable, isn't it? Didn't we celebrate New Year's Eve only yesteday?

June was mostly a summery month here, although we had by no means only sunshine.
Here are some random images and words referring to last month: 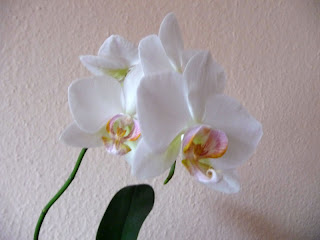 My orchid, which was a birthday gift from a friend of mine a few years ago (and happens to be the only potted plant in my flat, not counting the herbs on the window sill in the kitchen) had been blooming for a long time now, after an even longer rest. Only yesterday, the last blossom fell. I wonder how long it will be this time before it comes back. 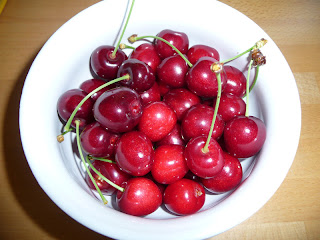 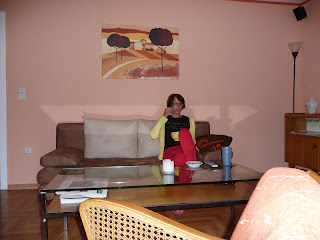 The cherry tree in front of our house is strategically well placed - I can pick cherries directly from my kitchen window. And so I did; several times I was able to fill my muesli bowl and then enjoy the cherries while watching "Midsomer Murders" or the occasional football match (it was, after all, the European Championship) on TV.


Have you ever wondered what has become of the forgetmenots that I mentioned several times on my blog last year? Well, I had transferred the terracotta planter from the outside window sill to the one in the stair case, to keep them safe from frost and hoping they would resume growth after the winter. I watered them regularly, but one day I came home and found the whole planter gone and emptied into the dustbin. My well-meaning neighbour must have taken a pity on the sad looking lot. They could have asked me first, but they never did, and so the forgetmenots didn't get a chance to see the next spring. 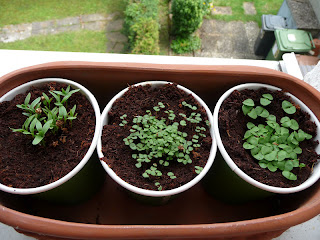 For my birthday this year, I received a set of seeds for three kitchen herbs, basil, coriander and thyme. On the 14th of June, I planted the seeds according to the instructions (it was one of those sets where the soil comes in the shape of a compressed tablet and turns into "proper" soil as soon as you add water).

They are doing well, I think, and I am looking forward to "harvesting" my own herbs. 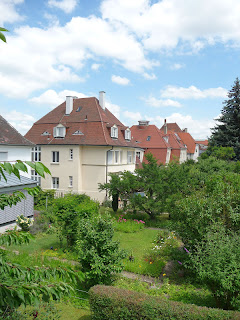 The view from my kitchen window shows green, green and more green - it is a time of the year I love very much. There are also beautiful flowers in the neighbour's garden, and many birds come visiting (as well as the occasional cat). 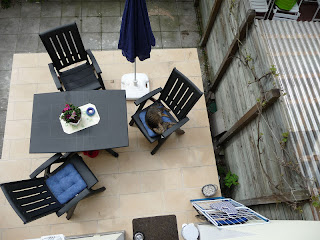 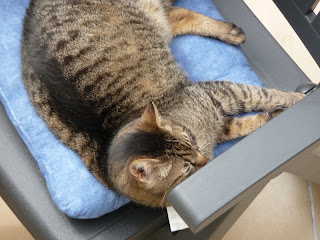 Speaking of cats, Lucky (that's his name) is convinced that his humans have bought new furniture for their patio just to accomodate him :-) This is what I see most mornings from my bedroom window when I look down after having pulled up the blinds. 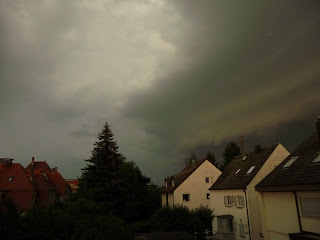 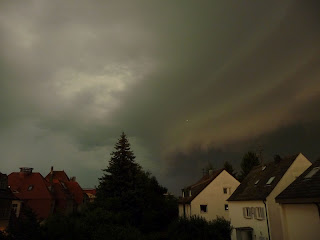 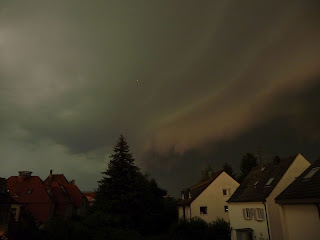 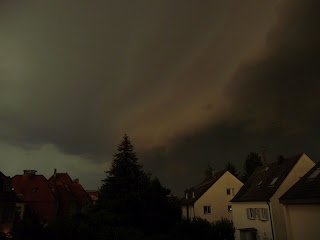 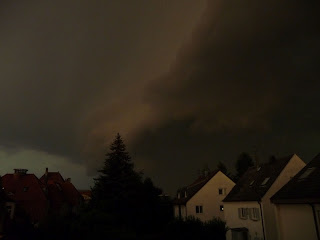 June was divided into two halves for me; I was on holiday the first half and back to work the second. The month ended with a BANG - literally! We had a massive thunderstorm on Saturday night, which put an end to my plans of going to the market square festival of my home town. Instead, I watched the spectacle from my window. Just before all hell broke loose, I took a few pictures of the very dramatic sky, complete with a plane that hopefully reached Stuttgart airport before conditions made flying difficult and dangerous.


And today, it is the 2nd of July, and I am looking forward to see what this month has in store!
Posted by Librarian at 09:23