„Speak Easy“ by Barry Gibbons was a truly delightful non-fiction read that I felt myself looking forward to when I knew I was going to have a chance to read a few chapters on my kindle during my trips to and from work. 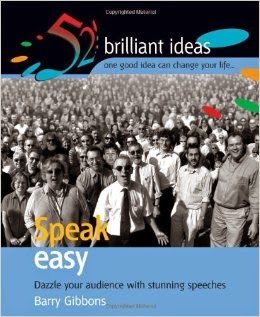 Like “Healthy Heart”, which I have recently read and reviewed here , it is part of the “Infinite Ideas” series and came to me in the shape of a free download from Amazon’s kindle store.

The topic is public speaking, something many people find scary and avoid as much as possible. For others, it is part of their working life, or they simply enjoy speaking at occasions such as weddings and anniversaries. No matter whether the reader is an experienced speaker, has been given the task to give a full business report to Senior Management for the first time, or has been approached by a friend who wants someone to “just say a few words” at some social gathering or other, they will benefit from the 52 ideas presented in this book.
I found myself grinning more than once, and recognized similar experiences (not as a speaker, but as part of an audience) to the ones described.
Public speaking is not rocket science, but there are some dos and don’ts – and they are not always the same for every occasion, and certainly not for every audience in every country. Therefore, good advice by someone who knows what they’re doing (and has been doing it for a long time), advice that is presented soundly and with humour, can only be useful.

Although I do rarely speak in front of groups (and even rarer are those groups larger than 20), and usually only to introduce someone else, I know I am going to apply those bits that fit my situation.
If Barry Gibbons’ other books are as entertaining as this one, it will certainly be worth looking for them, especially his (as far as I know) latest one, published in 2013: “Pushing Doors Marked Pull”, subheadline “An Unlikely Life in Three Parts” (love the title!). Here is an excerpt of the blurb I found on the “Infinite Ideas” website:

In the first part of the book we meet Barry as a directionless teen in Manchester during the early 1960s. Although the swinging sixties seem to largely bypass him a world is opening up to his generation, and he is not going to miss out. Part two catches up with Barry two decades later [...]. As chairman of Burger King Barry introduces us to the life of a corporate rock-star [...] as well as the fish-out of water trials of a Mancunian in Miami. In the final part of the book, he navigates his way through the trials of cancer [and] begins to ponder what it is that determines his chances of survival. Is it luck, genetics, medical science or something else – does he have his own unique collection of traits that could make the crucial difference?
Posted by Librarian at 22:13